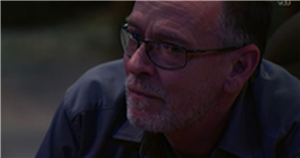 Adam Woodyatt broke down into tears on Sunday night's episode of I'm A Celebrity… Get Me Out Of Here! as he thanked his campmates for his experience on the ITV show.

Ahead of the first elimination, which ultimately saw Arlene Phillips voted out, the campmates sat around the fire as they reflected on their time at Gwrych castle so far.

And the 53 year old EastEnders star couldn't contain his emotion as he spoke about the "massive turnaround" in his life.

"You find out about yourself… you find out… why am I getting emotional?" he said before Simon Gregson said: "You're going to get me going!"

Simon spoke of his own experience, adding: 'It was so lovely to sit back and watch all the different groups of people get on… you guys just smashing it every day in the kitchen and entertaining us with… your rows…

"So, it was really, really good. I cannot wait to see you guys again on the outside."

"When I got ill, I felt like I lost control of me. And I lost me. You've helped me to remember who Kadeena is. I'm not defined by my illness," she said.

Shortly after, Strictly Come Dancing star Arlene received the fewest votes from the public on Sunday, 5 December, making her the first to leave from the 2021 series.

Speaking to hosts Ant McPartlin and Declan Donnelly, both 46, on her departure from the popular ITV programme, she shared: "In a way relieved, I wanna see my family. But emotional because of everything this has been, the highs and the lows.

"It's something in my life I never imagined I would be doing, and it's been extraordinary."

When asked why she went on the show to begin with, she shared: "Actually it's two things, there's my granddaughters. I grew up afraid of snakes – anything that moved – and I passed this on to my daughters.

"But I was determined I was not going to pass this on to my granddaughter. Which made me think about fear. This programme, which I've watched for so long, is about overcoming fear.

"One of the bravest, bravest girls I know is a little girl called Lilly, who has just won the Scottish Pride of Britain Awards for teenager of courage.

"And she's so fearless, and I thought, 'Here am I afraid of so many things, what better way can you push yourself than to do something like this?'