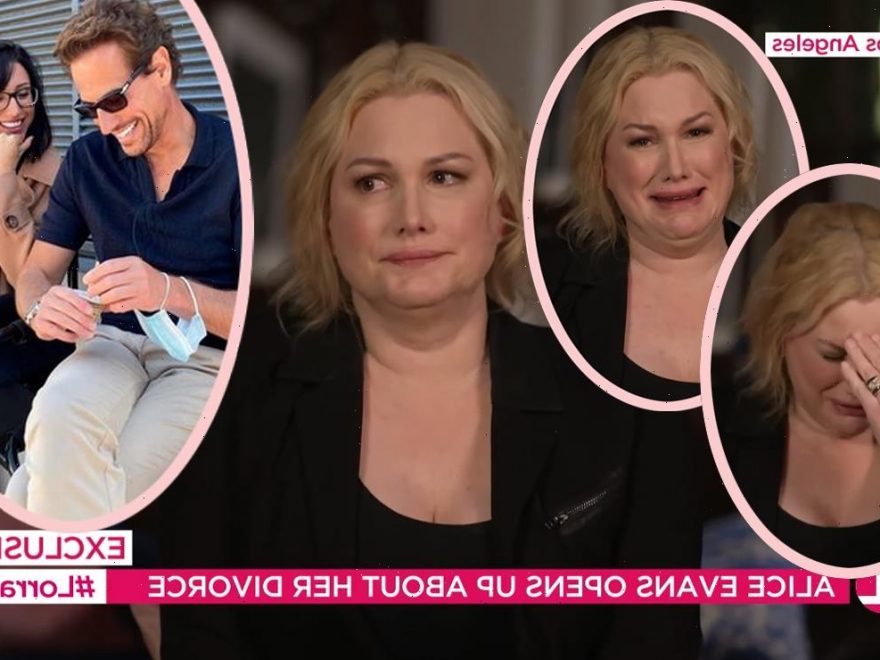 We’ve been waiting for this.

Alice Evans has been remarkably forthcoming on social media about her sudden split from longtime partner Ioan Gruffudd. The two had been together for two decades and married for 13 years; they share a 12-year-old and an 8-year-old daughter. But none of that seemed to matter when, in January, the Titanic alum shockingly left the family.

Like we said, Alice has been open about what happened, but it’s mostly been stream-of-consciousness revelations. We haven’t been walked through it enough to get a full picture of what happened before. But on Thursday the mourning momma gave a full interview to Lorraine Kelly, and it is just heartbreaking.

It actually began in August of 2020 when his show Harrow, which filmed in Australia, finally finished filming. The 53-year-old and her girls were so excited to see him after so long, she tracked his flight’s progress all night:

“We were so pleased to get him out of the country. I feel like a bit of a fool because I watched the plane… You know how you can sometimes see on the computer, you can see the place flying from New Zealand. I stayed up all night and watched it come here, back to LA. And he said he was back.”

But it was not the warm reunion Alice expected. She recalls:

“He came in, and he hugged the kids, and then just very dryly gave me a kiss on the cheek and that was when I knew something was very wrong.”

When Lorraine asks the Vampire Diaries alum if she had any inkling this was coming, she admits:

“Oh god no. We’d been together 20 years. I was one of those very complacent — what’s the Bridget Jones phrase? ‘Smug marrieds.’ And I think these are things like, just with other things one can go through, like loss of a parent or infertility, you don’t know what it’s like until it happens to you.”

She didn’t see it coming at all. And it hit her like a truck:

“He told me within the first few days, ‘I just don’t love you anymore.’”

Oof. So awful. She prefaces all this by saying:

“And look, I’m not questioning his right to feel that — I’m not bashing him — but it was so out of the blue… And then for about four months we just continued here, and he just kept saying, ‘I’m sorry, I don’t feel the same way for you anymore. I might leave, I might not leave.’”

UGH! That holding period is absolutely devastating! Never do that to someone!

It was that limbo he put her in that pushed Alice to the brink:

“And I eventually got to the point where I’d been on my own for the whole pandemic with my two kids. I’ve looked after them for ten years when he’s mostly filmed for the past ten years, outside of Los Angeles. So I was here and he was here, but he wouldn’t talk to me, wouldn’t look at me, and went to sleep in the spare room.”

Oh no… Poor thing. She tried to rely on her friends, but that didn’t work as well as one might hope. More on that later…

‘”I spoke to my friends and they kept saying, ‘This is not like him, this just doesn’t sound right.’ I think I bored … my friends just didn’t know what to say to me, and at one point I just thought, ‘I am going to lose my mind.’”

Eventually it happened. And that’s where we first learned anything about it.

“And I just tweeted, ‘He’s leaving us.’ And then all hell broke loose…”

That hell began with Ioan. The Fantastic Four star was furious with her for making their split public:

“His reaction wasn’t good, but I guess…”

She sort of shrugs, almost as if to say, ‘what else might one expect?’

Look, obviously he didn’t want this public. It makes him look terrible. The surprising thing for Alice was how much she got hit with the notion that she should quietly accept it:

“Initially, I think nobody had really done this before and I would say the reaction was about 50/50. You know, there was a lot of people who were angry with me and almost didn’t believe me, which is kind of weird if you think about it because it’s a pretty strange thing to make up if I’m gonna suddenly be 20 years with somebody then make up some idea that he’s left me, he’s leaving us, when he hadn’t… A lot of people were shocked and there was so much talk of a ‘dignified silence’. And I’m going to do this , because I don’t understand how you can talk about a dignified silence when I’m talking about my entire life falling to pieces around me.”

“I think people use that phrase a lot but as time went on, because I did stop tweeting — because I was told legally not to — and then I went back to it, kind of a messy story, but I think as people understood what had happened, I would say support is now like 80 or 90 to 10 in favor of me. Not in favor of me against him, but in favor of me speaking out and understanding why I’m doing it.”

Did her decision to go public ruin any chances of having a good relationship with her ex? Is he afraid of his words going public? Because, as Alice reveals through sobs, he refuses to speak to her anymore. After 20 years…

“No, he won’t talk to me. He’ll only talk to me through lawyers. Even if I lean into the phone while he (rarely) talks to the children on face time, he’ll move away and then call the lawyers. I don’t know why.”

The big hit came nine months after the split, when the other shoe dropped. A shoe belonging to another woman.

Ioan and his new girlfriend finally went public, making it Instagram official with a smiling photo together. The reason that was so brutal is that Alice knew as much about that as the rest of us. While she suspected another woman was involved, her first time laying eyes on her was on social media. Until then, Alice says, he was gaslighting her and their kids about it:

“It’s very bizarre because a lot of people know, I think you know, but he insisted, I think I’m OK to say this, he insisted until two weeks ago that there was nobody else.”

But when Ioan was finally ready to unveil his relationship with Bianca Wallace, an extra from Harrow who obviously caught the Welsh actor’s eye, he made sure his estranged wife would see it. Alice reveals:

“I looked at my Instagram, my phone pinged and said he has unblocked you on Instagram or whatever. I thought maybe there’s a chance, maybe he wants to talk.”

Oh no. Poor Alice. As we know, that is NOT what it was.

“It was announced by him and his mistress that they were a couple on Instagram two weeks ago. I looked at the picture and it said something like ‘finally somebody who can make me happy.’”

How could he have unblocked her just to stab her in the heart like that? He could have sat her down and braced her for the news, came clean when there was someone else. But no, he made sure he wouldn’t have to. How cruel…

And the hits kept coming!

“People from his set in Australia were saying so glad you guys are finally out and you’re allowed to be happy, and you’re not being held back anymore. And I was just slayed. I was slayed. This is my husband.”

Alice breaks down crying at this point in the interview, and it is just soul-crushing to watch. She pulls herself together to say:

Yeah. We can’t help but wonder how many of their friends who denied anything was going on were already in the know about the relationship. And how long it was going on for that matter!

“I feel like a bit of an idiot as well because, you know, hindsight is 20/20. And there are now moments I realize looking back, ‘Oh god when that was said…’ I realize, I’m pretty sure this has been going on for quite a while. It’s not somebody that he’s just met now.”

That much seems certain. You don’t go from a first date to IG official. Plus, Bianca didn’t just happen to be in France for that photo, she obviously journeyed with him — apparently getting some kind of special clearance to travel together in a pandemic despite not being family.

Speaking of family, you had her sister welcoming him to the family in her own IG Stories?? Oof. Just awful, all of it.

As for the future, poor Alice is back in limbo:

OMG, wait, WHAT?? He’s fighting her for custody after not being around and then LEAVING?? After lying to them about his new girlfriend and then ambushing them with the reveal?

After skirting his parental responsibilities by refusing to come clean to the girls about the divorce, allegedly making them believe he might come back?! You’re telling us he’s fighting you on primary custody after that??

“Initially it was going to be an amicable divorce, and I thought that I could deal with that. But now it’s gotten very nasty for some reason, and I don’t know why.”

Going public may have exacerbated things. But why should she be expected to take this quietly to preserve his dignity??

And we aren’t the only ones who agree! She ends by telling Lorraine:

“You know what’s amazing? Social media has been incredible. Social media gets a bad name, but the people I know on Twitter already but even the people who have just chimed in, I just wanted to say thank you to everybody… just complete strangers. And I just want to thank all those people, on Instagram too, who have been so kind, and I don’t think I would have gotten through it without their help.”

See the emotional full interview (below):

After breaking down and revealing she thought about self-harm, Alice made sure to let everyone know she was OK with a special IG shout-out:

So glad to hear it, gurl!