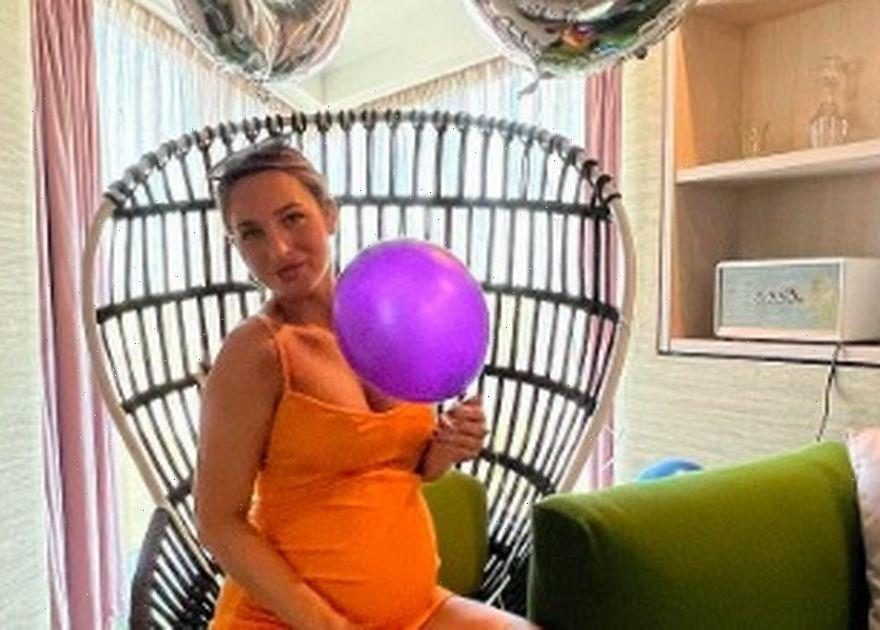 Maeva D'Ascanio has shared a glimpse of her 30th birthday celebrations, which included a number of lavish gifts and fun outings with her loved ones.

The Made in Chelsea star, who is currently pregnant with her first baby, shared a collection of photos on social media to mark her milestone birthday and gushed over her fiancé James Taylor, 27.

"30 !!!! My last year of my twenties was the best one, I’m a very lucky girl. Being engaged to the man of my dreams and excepting a beautiful little baby, the year ahead is going to be Magical," Maeva told her 279,000 Instagram followers.

The reality TV star looked stunning in a vibrant orange dress as she showed off her blossoming baby bump in a snap taken on her big day. She paired her outfit with a pair of platform white sandals and wore her brunette locks swept back in a bun, as she posed with a number of balloons.

Maeva could be seen sitting on a chair inside swanky hotel nhow London, located in East London, where she kicked off her birthday celebrations.

The mum-to-be could then be seen posing for a picture outside as she enjoyed a day out with her loved ones, and her pal Libby Taylor posted a sweet photo of Maeva and gushed: "The most beautiful baby mama". She could be seen holding onto a huge bouquet of flowers that her close pal had gifted her, and she later thanked her publicly, writing: "Thank you to my angel for these beautiful flowers".

Maeva's celebrations didn't stop there and she then changed into another orange mini dress, this time one with puff sleeves and a sweetheart neckline, as she was joined by nearest and dearest for more fun.

She shared a snap of homemade pizzas being cooked in an outdoor oven as well as a photo of two pink balloons and another with the number 30 printed across it, as she thanked her fiancé and friends before admitting she was missing her parents.

"I've spent such a lovely weekend with my little family," she said as she tagged her pals, before adding: "Missing my parents," alongside a red heart emoji. Maeva's 30th birthday celebrations come after she and James announced their engagement earlier this year after revealing that they're expecting their first child together.

Revealing the news with a series of adorable snaps that showed James kneeling down and caressing his partner's bump, fans were overjoyed for the pair.

And only a few days later, Maeva shared the couple had gotten engaged during a sun-soaked trip to Portofino in Italy.

As well as some gorgeous images of the scenery, as the pair stayed in a quaint hotel overlooking the lake, the Made in Chelsea star also posted a close-up image of her showing her ring.