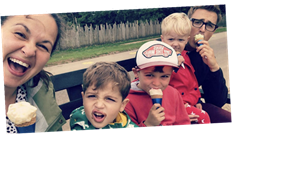 Proving she’ll do just about anything for her kids, Giovanna Fletcher has revealed she served her sons a bizarre dinner of fish fingers and custard inspired by Doctor Who.

The I’m A Celebrity…Get Me Out Of Here! winner says her three boys begged for the dish after becoming fans of the BBC One series.

Admitting she caved to their demands, Giovanna wrote on Instagram: “They asked and asked and asked… so I caved. Fish fingers and custard. Yummy. I blame The Doctor for making such passionate Whovians out of the Fletcher boys."

Giovanna’s pal Rochelle Humes couldn’t believe what she was seeing, commenting beneath the post: “What the hell,” alongside a crying with laughter emoji.

JLS star JB Gill also commented: “You’re the only one” and added a crying with laughter emoji.

But others parents were quick to reassure Giovanna, with one writing: “Definitely not alone!!!” while another added: “My eldest loved it”.

A third wrote: “My 8 year old loves it with ice cream”.

Back in 2014 Giovanna revealed that it was Tom who had converted her to the BBC One show, writing: “Tom wanted me to write something about Doctor Who. What can I say? I watched it AND I enjoyed it. With any luck he might succeed in turning me into a Whovian this series”.

The pair tied the knot in 2012 a ceremony exclusively covered by OK! Magazine.

In a recent interview Giovanna confessed that she used to have a “dysfunctional relationship with food” and would punish her body.

She admitted: "I look back at photos now and think: 'What were you worried about?' But at the time it was about punishing my body, being skinny and making myself smaller because then I’d be more acceptable.

"I had a dysfunctional relationship with food – certainly how I viewed my body and definitely how I treated it in terms of food was dysfunctional."