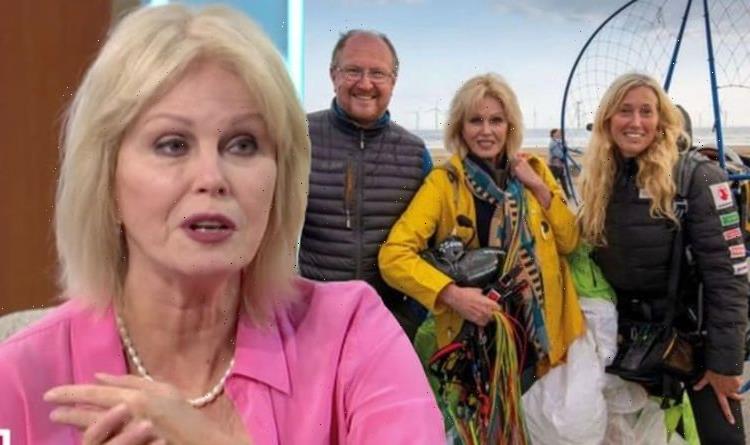 Joanna Lumley, 75,  appeared on Lorraine this morning with replacement host Christine Lampard and got emotional as she shared how tragedy struck amid filming for her latest show, The Human Swan. Dad-of-two Dan Burton, 54, who directed the documentary, died in a mid-air crash in a paramotoring accident in the Scottish Highlands in September, while colleague Sacha Dench was seriously injured.

The latter had been attempting a 3,000-mile journey around Britain in an electric paramotor and Dan was supporting her on her journey.

Christine said to Joanna: “I know there was some bad news when you finished filming.”

Show host Christine continued: “Just terrible news after having such a wonderful experience.”

Joanna agreed: “I know, but I went to see her [Sacha] in hospital and so we have dedicated the film to Dan Burton, who was the man who very sadly lost his life.”

Unfortunately, the show ran out of time before the actress could go into more detail on the incident.

In a previous interview with Radio Times, Joanna recalled her shock and grief over the horrifying accident.

She said: “The shock was so vivid because it seemed such a short time since I’d been with them both.

“We’ve all encountered sudden death, and the sense of disbelief – you can’t quite process it.

“I couldn’t believe Dan would be [with us] no more.”

Joanna – who wasn’t there when the accident took place – said Dan’s family insisted that they finish the film.

Sacha also said that she wanted it to be completed.

“I was terribly moved,” said the Absolutely Fabulous star.

The documentary is entitled Joanna Lumley And The Human Swan, which is what Sacha is known as, and looks at issues like plastic waste on the country’s beaches and coastal erosion.

After Dan’s death, his family released a statement on the Conservation Without Borders website, which said: “Dan was a beloved husband, son, father and brother and our family is utterly heartbroken.

“Dan was a very experienced pilot, a pioneer in technical diving and paramotoring and a true adventurer.

“He was proud to support Sacha on her journey around the UK in an electric paramotor, to raise awareness about the inspiring action people are taking to tackle climate change.

“We will draw on that love as we cope with his loss.”

Joanna Lumley and the Human Swan airs on ITV on November 1, and will be dedicated to Dan Burton.