In 2007, Naomi Campbell was sentenced to five days’ community service in New York City as part of her punishment for throwing a BlackBerry at her housekeeper’s head. Each day, the statuesque supermodel would walk to and from New York’s Manhattan District 3 sanitation department in a new outrageous get-up – patent stiletto boots, fur bucket hats, and, on her final day, a silver sequined couture gown.

Stephen Merchant, co-creator of The Office, saw it all with a smile. “It was just delicious,” says Merchant. “My parents used to work for [community services] in Bristol in my sort of later teens and I was always intrigued, because it’s such a mix of people. You’d get everyone, from the real criminals to an old guy that they realised was stealing cabbages from allotments just to get community service because he was lonely.” 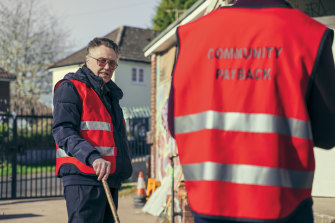 Christopher Walken has forged a movie career around playing bad guys, and in Outlaws he milks the role with gusto.Credit:James Pardon/BBC Studios

Fast-forward a couple of decades and Merchant has turned these memories, and the humour and peculiarity of seeing a supermodel in a high-vis tabard, into The Outlaws, a Bristolian caper about a group of unlikely felons fixing up a dilapidated community hall. And yes, one of them, played by Eleanor Tomlinson, is a distinctly Naomi-Campbell-ish diva who arrives in a Range Rover and a new outfit every day.

But Poldark’s Demelza is not The Outlaws’ biggest surprise package. That title goes to movie legend Christopher Walken, who turns up as Frank, an elderly scoundrel who’s pulled one trick too many and now has an electronic tag on his ankle. With all respect to Merchant’s film industry credentials (the 201 centimetre comedian wrote and directed 2019 film Fighting With My Family, and, in the same year, appeared as a Gestapo leader in Taika Waititi’s JoJo Rabbit), how on Earth did he get Walken on board?

Not only is the 78-year-old star a bona fide A-list Oscar-winner, but, with his sly eyes and drawling delivery, he’s also one of cinema’s great bad guys. It only takes a quick cameo for Walken to steal a movie, as he did in The Deer Hunter, A View to a Kill and Pulp Fiction.

“I play so many villains and strange people,” he says when he speaks to me via Zoom from a hotel room where he’s quarantining before starting filming, “that nowadays I jump at things like this – to play somebody’s grumpy old grandad rather than somebody who wants to put a bomb under a bus.” 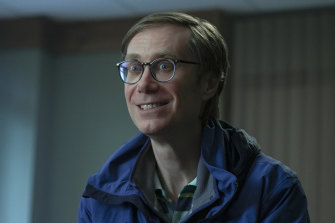 Stephen Merchant co-created Outlaws, a comedy about a bunch of misfits consigned to community service for their crimes.Credit:Sam Taylor/BBC

He talks about taking parts, but according to Merchant the problem is getting parts in front of Christopher Walken – he doesn’t have a phone or computer. Merchant had to go to Walken’s house in Connecticut to try to persuade him to be in his show. Evidently the meeting went well.

“With interviews like that, between actors and directors, one would think that they have to be about, you know, ‘what’s my motivation?’” says Walken, mad, wiry hair brushed back like Elvis and a twinkle in his eye. “But it’s not that at all. Mostly, you sit and you talk about movies, restaurants, girls, my cat, you know? It’s very often almost anything but the thing you’re about to do, which I think is the way to do it.”

Walken is very funny, as he’s proved several times hosting the US sketch show Saturday Night Live. His first stint working in Bristol (two series of The Outlaws were filmed back-to-back), happened to coincide with violent protests against the Police, Crime, Sentencing and Courts Bill earlier this year. “First time I came here there was a lot of noise outside. Second time I came, there was too. First time it was politics, second, it was the soccer.”

He ascribes his sense of humour to his upbringing. Growing up in Queens, New York, after the war, his mother pushed him and his brothers to perform.

“I was from one of those families that meant I was in showbusiness from the age of five,” he says. “And when I was growing up in America, it was the birth of television after the Second World War. There were these huge shows. Whatever my sense of humour is, it was formed by people like Milton Berle and Sid Caesar, and Broadway musical comedy.” 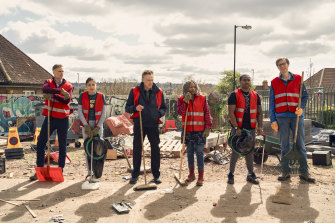 Walken trained at the Washington Dance Studio and got his first break on the Broadway stage opposite Liza Minnelli. “I was in Broadway musicals for years, as a dancer, and I think my whole sensibility and even my acting technique is very ‘absence of a fourth wall’,” he says. “The famous fourth wall doesn’t really exist for me, because of all that time in musicals, where always the other character in the scene is the audience. So I’m always very aware of the audience.”

It’s an audience who, in recent years, have been pummelled with a type of movie-making that is light years away from Walken’s musical roots.

“Nobody’s asked me to do a Marvel! But I think it’s too bad that with a movie that costs $200 million to make, you know, dozens of smaller movies could be made for that money. And then it’s too bad that if you make a movie now, it’s unlikely to be seen in a [cinema] unless it’s one of those big ones. The smaller movies more likely go straight to the small screen.”

It’s part and parcel of a commercial evolution that has ended up with a legend such as Walken appearing in a big-budget TV series part-financed by a one-time online bookshop, Amazon. But when it means that younger viewers will get to see Walken strut his stuff, it seems churlish to complain.

As well as Walken and Tomlinson, there are five other disparate characters working at the community hall in The Outlaws, from a straight-A student (Rhianne Barreto) who shoplifts for thrills to a young man in debt to the wrong people (Gamba Cole), a middle-aged, middle-class Brexit supporter (who confounds the usual stereotypes) and a sad-sack lawyer played by Merchant.

There’s a thriller plot to do with “county lines” drug gangs, and the whole thing is underpinned with some very real peril: the wonder is that it’s a comedy at all. “I think humour can always naturally arrive from very dramatic situations,” says Merchant. “I often think back to a lot of the comedies that I loved growing up, whether it’s Steptoe and Son, or Reggie Perrin, or particularly Whatever Happened to the Likely Lads. If you removed the laughter tracks, they would be desperately bleak, existential dramas.”

To lighten the mood, musical veteran Walken breaks out some of his old moves. “Yes, there is a bit of dancing on the show,” the actor confirms. “Have I still got it? You know, I hope so. You’ll have to watch and see.”

As it happens, I have watched it. No spoilers, but Walken has still got it.

The Outlaws is on Amazon Prime.