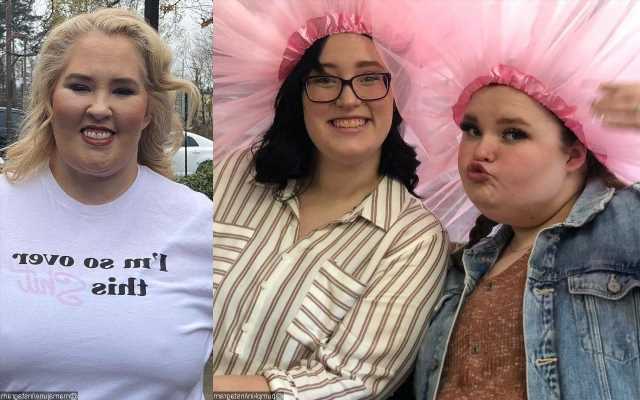 In a new interview, Pumpkin reveals that both she and the ‘Here Comes Honey Boo Boo’ star ‘didn’t know about’ Mama June’s wedding to Justin Stroud in March.

AceShowbiz -Honey Boo Boo a.k.a. Alana Thompson and her sister Pumpkin a.k.a. Lauryn Efird spoke out about their mom Mama June’s (June Shannon) surprise wedding to Justin Stroud. In a new interview, Pumpkin revealed that they “didn’t know about” the nuptials which took place in March.

“We didn’t know about it,” Pumpkin told E! News. “I actually got a receipt in my PO Box that said she had applied for a marriage certificate. Then I asked her about it just recently. She denied it. And then eventually she was like, ‘Oh, I got married’ and we were very, very shocked.”

As for Alana, she was surprised by Mama June’s sudden decision to get married. She claimed that she wasn’t expecting her mom to remarry following the heartbreak over the years, including her split from Mike “Sugar Bear” Thompson in September 2014.

“It definitely did catch me by surprise because Mama was always one to say she would never get married,” Alana admitted. “But I mean, my mom now, she’s definitely different.”

Both Alana and Pumpkin haven’t met Justin, but they refused to share whether or not they like him. The two, however, shared how they felt about missing the wedding ceremony. “If she feels like we don’t need to be a part of that,” Pumpkin said, “then it is what it is.”

Last month, June was revealed to have lost custody of Honey Boo Boo. Following a lengthy trial, the 42-year-old reality star’s 16-year-old daughter, according to reports, will now be placed in the care of her 22-year-old sister.

“It is in the best interest of the child that the plaintiff [Lauryn] is awarded sole custody,” court documents obtained by The Sun read. The outlet went on to claim that Mama June, who shot to fame alongside her family on the reality series “Here Comes Honey Boo Boo” back in 2012, will have to pay $800 per month in child support until Honey Boo Boo turns 18 and that any “visitation between the defendant [June] and the minor [Alana]” will be at the discretion of Lauryn.