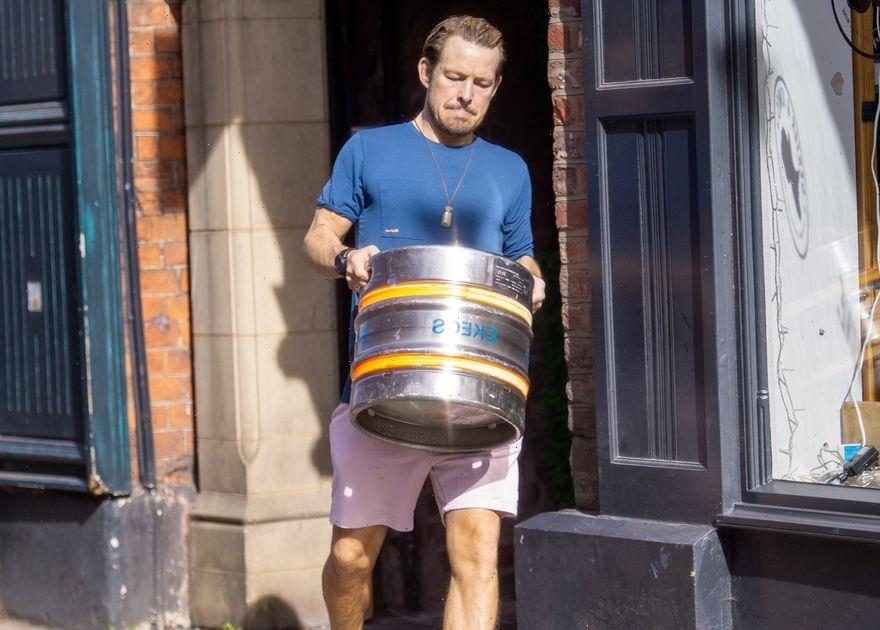 Soap actor Adam Rickitt has been spotted getting stuck into work at at his gin bar after tearfully revealing he was scammed out of "tens of thousands of pounds".

The 44 year old star, who has appeared in Hollyoaks and Coronation Street, made the emotional admission in a video posted to social media on Friday.

On Tuesday, Adam looked downcast as he carried barrels and chairs outside the Cheshire venue, named Dexter & Jones, which he co-runs with his Good Morning Britain correspondent wife Katy.

The actor cut a glum figure in a blue t-shirt, pale pink shorts and bright trainers.

Adam shared his embarrassment and upset at being “completely conned” out of thousands of pounds last week.

The elaborate scam began with a text claiming to be from Adam’s bank, Barclays, which said there had been "suspicious activity" on his account and that a member of the fraud investigations team would be ringing him.

Adam then received a call from a number which seemed legitimate and was asked “the same security questions I always have”.

He explained: "Long and short of it was he explained to me that someone had been into the Crewe branch and had attempted to withdraw money. He said the only way that person could do that was using my driving licence and my passport and my signature."

When asked if it was him, Adam said "No," which left him worrying that this was a case of identity theft. He then rang his wife and asked her to check if his passport and driving licence were at the house, which they were.

After a back and forth including multiple phone calls, Adam went into the banking app on his phone and found a huge sum had left his account.

"It was a scam," he said in the video. "I feel like an idiot. It's very embarrassing. It's hard to look my wife in the eye. The thing was, they even knew how much money was in my bank account.

"Naively, I didn't know you could ghost phone numbers," he said. "As a result of this, they took tens of thousands of pounds."

Adam and his wife have run their bar, Dexter & Jones for a number of years. During the pandemic, they swiftly pivoted to being an off licence and succeeded in keeping the establishment going.

While giving OK! an exclusive tour of the swish bar, Katy revealed it had kept them going during tough times in lockdown.

She told us: "Adam has to keep busy. So the bar has been a godsend after Hollyoaks because other projects got cancelled due to lockdown."