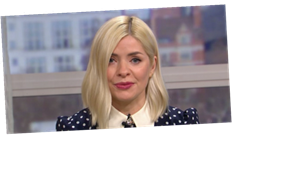 Kind-hearted Holly Willoughby made a sweet gesture to a single mum who was struggling to homeschool her children on her return to This Morning.

Holly was back presenting alongside Phillip Schofield on Wednesday 6 January after two days' absence to be with her family and admitted she is 'just about holding on'.

But she was back with a bang and the star offered to send a mum-of-three her own printer to help make life easier for the dyslexic parent.

She made the gesture to the shocked caller, who was telling Holly, Phillip Schofield and Deidre Sanders about how hard life was with her three kids not at school during lockdown.

June, who called the show from Nottingham, explained they have just one laptop between them all.

She described how she was forced to write out all of her twins’ work by hand because the family printer was broken.

Phillip offered some words of comfort to her, telling the struggling mum: "You can’t beat yourself up about this, because there’s only so much you can do."

But Holly knew there was something she could do – and came to the family's rescue.

She said: "Do you know what, I’ve got a spare printer at home. I’m going to bring it in tomorrow.

"Mine broke, I ordered a new one and the other one kicked back into life, and all I keep doing when I’m sitting at my desk is banging my leg on it.

"You can have that printer. I’ll bring it in tomorrow and you can have it, so that’s sorted your printer out.

Holly's fans loved the sweet offer and took to Twitter to says that's why they love her.

One posted: "Holly offering her old printer to a single mum struggling to home school her 3 kids has pulled on my heart strings."

Another wrote: "Holly giving her spare printer is so heartening! That lady is trying to home school her child, and that’ll mean the world to her."