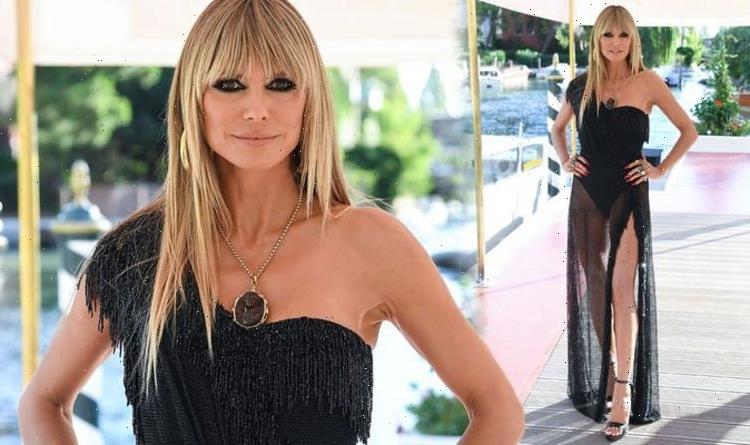 Supermodel Heidi Klum arrived in style at the Dolce and Gabbana fashion show in Italy last night. True to form, the 48-year-old star turned heads when she made her way to the star-studded Venice event in a show-stopping gown.

Heidi showcased her toned pins in a stylish one-shoulder design which featured a bodysuit and a skirt made out of see-through fabric.

It also featured a thigh-grazing split which highlighted her long legs as she walked along the jetty to the bash.

The America’s Got Talent judge teamed her gown with a pair of strappy heels and glam make-up.

She wore her blonde tresses in a sleek straight style with a fringe.

Heidi then opted for dark eyeliner to enhance her features for a dramatic look.

A large pendant necklace and a collection of rings on her fingers completed her stylish ensemble.

The TV star arrived for the A-list fashion show with her husband Tom Kaulitz.

She later posed for pictures with the Tokio Hotel guitarist, who looked very dapper in a crisp white shirt and black suit.

Her eldest daughter Leni, 17, also a model, walked the runway for the designer.

Sharing footage of her big moment online, Heidi told fans that she was a “proud mom”.

Lady Kitty Spencer, 30, was also in attendance at the Venice fashion show.

The niece of the late Princess Diana looked lovely in an elegant cream gown with beaded detailing.

She stepped off the boat with former Strictly star Emma Weymouth, the Marchioness of Bath.

Dame Helen Mirren and Jennifer Lopez were also guests at the Italian event.

The 76-year-old actress looked radiant as she made her way to the fashion party via boat.

The F9 star shimmered and sparkled in an opulent ensemble which featured a gold bodice adorned with gems and pretty details.

The accompanying skirt included images of classic artwork while a cream chiffon material covered her shoulders.

Meanwhile, the 52-year-old singer and actress stole the show in a floral green cape and gem-encrusted crown.

She teamed the eye-catching number with a crop top and shimmery trousers which showcased her toned abs.

The previous night, mum-of-four Heidi headed out to explore Venice with her teenage daughter.

The pair dazzled in coordinating sparkly dresses, posing for a picture which was later posted on Instagram.

While the 17-year-old wore a crystal-encrusted minidress, her famous mum opted for a full-length strapless gown.

“A night out in Venice @leniklum @dolcegabbana,” Heidi captioned the snap, in view of her 8.4 million followers