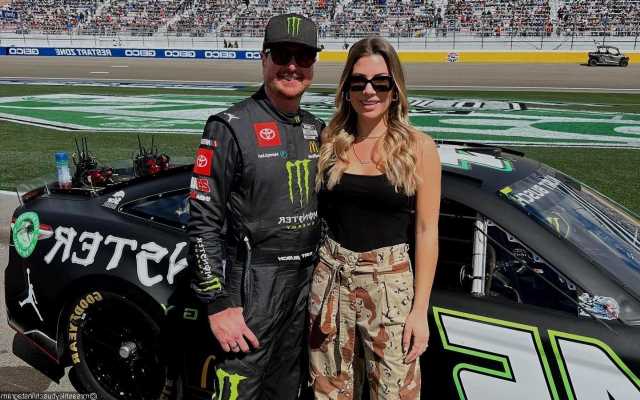 The NASCAR star is hit with allegations from Ashley Busch that he ‘committed a tortious act,’ cuts off her access to their joint bank account and demanded she leaves their home.

AceShowbiz –Kurt Busch is left heartbroken by one major failed relationship. On Tuesday, May 17, the NASCAR Star confirmed that he is in a process of divorce from wife Ashley Busch after nearly six years of marriage.

Ashley was reported to file for divorce from the 43-year-old pro auto racing driver on May 9. In a court document obtained by TMZ Sports, the polo player stated that their marriage is “irretrievably broken.” She also reported that he “committed a tortious act,” although she did not elaborate further on the allegation.

When TMZ reached out to Kurt for comment, he finally spoke up on the matter. “I am heartbroken to confirm that my wife Ashley and I are working to dissolve our marriage,” the 2017 Daytona 500 winner confirmed. “Divorce is a personal and private matter and I hope our privacy will be respected.”

In the court document, Ashley also pointed out things that went wrong in their relationship that led her to end the marriage. She noted that Kurt cut off her access to their joint bank account and credit cards, and demanded that she leaves the family home at the beginning of June.

Despite his ongoing divorce, Kurt is actually having a great season in 2022. As a matter of fact, on Sunday, May 15, the racer won his first race of 2022 at Kansas Speedway.

Kurt tied the knot with Ashley in December 2016. The two did not share any children together. The estranged couple once appeared in 2019 reality TV “Racing Wives”, and had been actively sharing Instagram posts of each other.

On February 8, Ashley posted an Instagram picture of them staring into each other’s eyes. Along with the sweet photo was a caption that read, “Five years ago we were married on this special island, St Barths you have our hearts.”

A month later, on March 8, Kurt also shared a picture of the two of them in honor of Ashley. “Happy #InternationalWomensDay to all women today and a special shout out to the two most important women in my life,” he wrote in the caption.