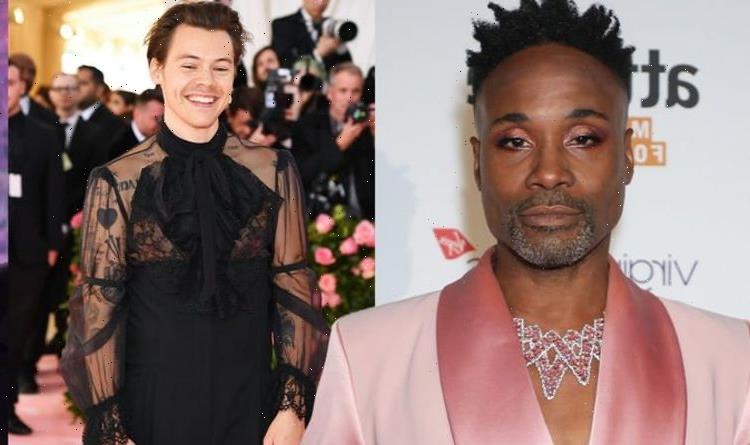 Harry Styles, 27, posed in a dress last year for Vogue’s US magazine in the first gender-neutral shoot in which he wears a Gucci dress and skirt. The One Direction singer told the magazine he thinks womenswear is “amazing” and that “clothes are there to experiment with”.

However, Pose star Billy Porter, who wore a gown on the red carpet of the 2019 Oscars, was unhappy with the decision, as he claimed the magazine made a mistake by using “a straight white man in a dress” to grace the landmark cover.

“I’m not dragging Harry Styles, but he is the one you’re going to try and use to represent this new conversation?

“He doesn’t care, he’s just doing it because it’s the thing to do,” Billy told The Times.

“This is politics for me. This is my life. I had to fight my entire life to get to the place where I could wear a dress to the Oscars and not be gunned now. All he has to do is be white and straight.”

The award-winning star went on to suggest that he “personally changed the game” for men choosing to embrace skirts and dresses as part of their wardrobe.

As well as acting and singing, Billy is famed for his incredible red carpet looks. As well as his custom-made Christian Siriano Oscars tuxedo dress.

The star also wore a stunning white suit with train to the 2020 Emmys and dazzled in a rainbow coloured halter neck dress to mark the start of this year’s Pride Month.

While many of Harry’s fans and peers loved his Vogue cover, certain right-wing critics were less enthusiastic, including US pundit Candace Owens, who commented at the time: “Bring back manly men.”

Harry quickly responded to the criticism by posting a picture of himself in a suit with frills eating a banana with the caption: “Bring back manly man.”

It comes as Boy George claims that Harry Styles has pulled out of playing him in a Culture Club biopic because he’s “too scared”.

Former One Direction star Harry had been in talks to take the lead role in new movie Karma Chameleon.

But George reveals how another UK hitmaker, Yungblud, is now favourite for the job after Harry “ran” from the project.

The disappointed icon says: “They are looking at a kid called Yungblud. He is a big English sensation. He is quite young and he has been auditioning.

“There was talk of Harry Styles, but I think he ran. He was too scared.”

Losing Harry is a major blow for the production. The former X Factor star has gone on to become an even bigger superstar since releasing his debut solo album back in 2017.

Having such a well-known name in the lead role would have guaranteed the film to be a box office hit. Karma Chameleon will document Boy George’s sensational rise to fame from growing up as a working-class boy to becoming one of the biggest pop stars of the eighties.

The film, named after the group’s 1983 No. 1 single, had originally been planned to start this year, but was delayed due to Covid and casting issues.

George says of the film: “I don’t want it to be like a fantasy of somebody else. I feel like it should be honest and truthful as I am hilarious.

“I say tell the truth as the truth is far more interesting than things that are made up, you know.”

The movie was given the green light after the success of Queen’s Bohemian Rhapsody and Elton John’s Rocketman.

George originally suggested Game of Thrones actress Sophie Turner could play him when asked in 2019. But it is claimed he has since had his heart set on Harry.