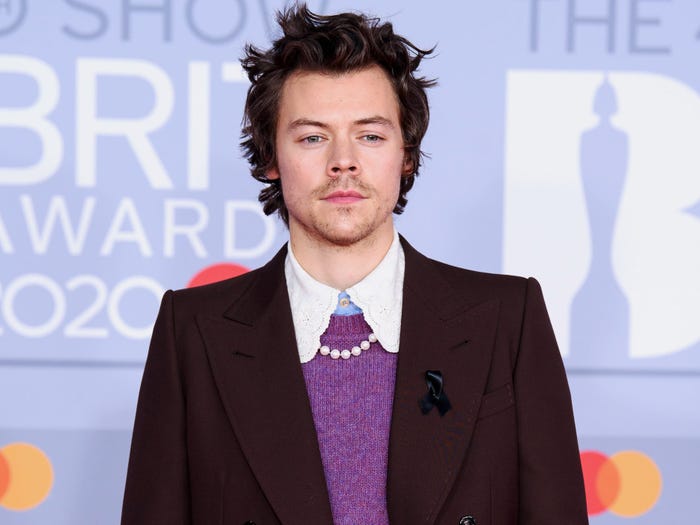 Harry Styles is Vogue's December cover star, a selection that's been praised by fans and fashion enthusiasts alike — but many members of the LGBTQ community are less impressed.

The "Golden" singer is the first non-female solo cover star in the magazine's 128-year history. For his cover shoot, photographed by Tyler Mitchell, Styles wears a variety of stereotypically feminine clothing.

"I'll go in shops sometimes, and I just find myself looking at the women's clothes thinking they're amazing," Styles told Vogue's Hamish Bowles. "It's like anything — anytime you're putting barriers up in your own life, you're just limiting yourself. There's so much joy to be had in playing with clothes."

He added: "I've never really thought too much about what it means — it just becomes this extended part of creating something."

In his post-One Direction solo career, Styles has become known for his androgynous, fluid fashion sense. And though he avoids defining his own identity, he has defended his "sexual ambiguity" and remained an outspoken supporter of LGBTQ rights.

Indeed, Styles is wearing a dress on the cover of Vogue, which many have celebrated as a milestone for breaking down aesthetic gender norms.

But others have questioned Styles as a symbol of progressive gender fluidity.

Vogue has received backlash for centering a white, cisgender man in a movement largely founded by transgender people of color — especially when those very people are more often shunned than celebrated.

Alok Vaid-Menon, a gender non-conforming performance artist and author of "Beyond the Gender Binary," explained their mixed feelings with an Instagram post that's racked up more than 250,000 likes.

"Am I happy to see Harry be celebrated for openly flouting gendered fashion norms? Yes. Do trans femmes of color receive praise for doing the same thing every day? No," they wrote. "Do I think this is a sign of progress of society's evolution away from binary gender? Yes. Do I think that white men should be upheld as the face of gender neutral fashion? No."

"Make no mistake: trans femmes of color started this and continue to face the backlash from it," Vaid-Menon continued. "Our aesthetics make it to the mainstream, but not our bodies. We are still dismissed as 'too much' and 'too queer' because we aren't palatable enough to whiteness and heteronormativity."

"Is that Harry's fault? No. It's the fault of systems of transmisogyny and racism."

Through their manager, Vaid-Menon declined to offer any additional comments but gave Insider permission to cite their post.

Although it's clear that Styles is well-liked, the fact remains that transgender and gender non-conforming people — particularly people of color — are regularly dismissed or even targeted for making similar fashion choices, despite leading the charge against heteronormativity.

Many critics were more skeptical of Vogue than of Styles himself, calling for the magazine — and the fashion industry at large — to embrace trans and non-binary people with the same enthusiasm.

Others explicitly called for Vogue to feature a trans person on its cover, which has never been done by the flagship brand. (Some editions of the magazine in other countries have met that milestone, as with Laverne Cox on the cover of British Vogue in 2019.)

Some critics, much like Vaid-Menon, also held space for celebration and defended Styles.

"Just a little reminder that you can celebrate something while still wanting more," one person noted. "Enjoying Harry's Vogue color while wishing queer people had more representation and felt the same freedom he does."

A representative for Styles didn't immediately respond to Insider's request for comment.