Ahead releasing his second album, Fine Line, on Dec. 13, Harry Styles appeared on The Late Late Show with James Corden, and let me tell you, he totally delivered. Apart from playing a hilarious game of "Spill Your Guts or Fill Your Guts" with ex-girlfriend, Kendall Jenner, the "Adore You" singer performed a concert… in the middle of a crosswalk. As expected, Harry Styles’ "Crosswalk Concert" on James Corden got so chaotic and that’s what makes it so great.

One of the Late Late Show‘s greatest staples are its "Crosswalk the Musical" bits. In case you’re unfamiliar with them, they involve James Corden inviting a musical’s cast to perform their biggest hits in the middle of a crosswalk while the light is red. In the past, James Corden had the Frozen and Aladdin casts on his show, and they were both hilarious. Now, for the first time ever, James Corden put on a "Crosswalk Concert" and he invited Harry Styles to be the first performer.

In the video, Corden and Styles met up near a crosswalk, where the television host revealed the big news to Styles, who seemed very confused about the situation. Eventually, Styles agreed to do the concert, but first, Corden and Styles promoted the show by giving out flyers to every driver in their vicinity. "[There’s a] show today. Don’t know why," Styles told the drivers.

Styles then gave up on promoting the show and threw the flyers in the trash. "This is a total waste of time. [James] can’t even spell my name right," Styles said, referring to the hilarious "Harry Stiles"posters James made, which featured a picture of Styles during his One Direction days. 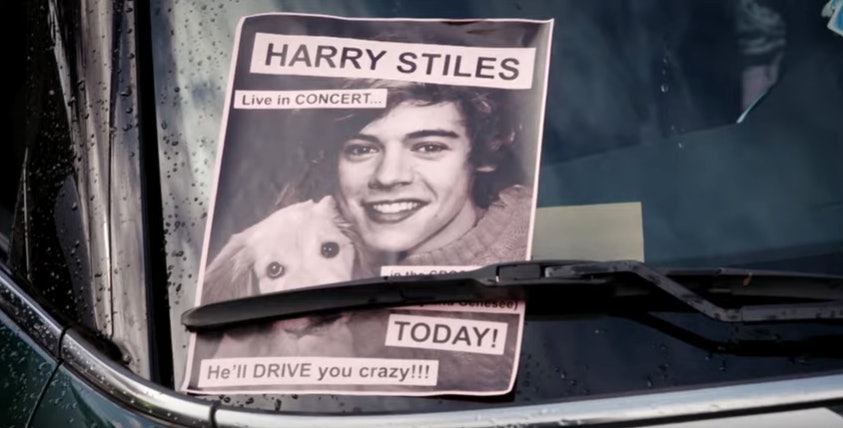 Once the concert actually started, Styles rocked out as usual, but with a twist. Instead of being surrounded by his band, Styles was accompanied by a group of dancers, who were trying to hype up the drivers as much as possible. During his "Kiwi" set, Styles ran along the line of cars and even put his butt up against one of them. Meanwhile, Corden urged Styles to act like "Mick Jagger," and acted as Styles’ personal merchandise seller.

Styles also performed his newer hits, like "Watermelon Sugar" and "Lights Up," and ended his set by performing his debut single, "Sign of the Times."

Fans can see Styles perform his new hits in person when he embarks on his 2020 Love On Tour.