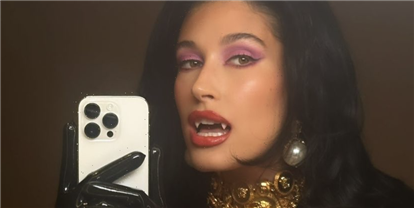 Celebrities truly went all out with their Halloween costumes this year, and when I say Halloween costumes I mean highly produced professional photoshoots that were clearly done months in advance of Halloween. And on top of recreating an iconic YSL floral runway look that we’ll get to in a moment, Hailey Bieber stepped out as a Versace Vampire. Which is basically like a regular vampire only fashion, and covered in belts and chains.

And that aforementioned floral moment:

Hailey is also getting into the Halloween spirit with Kylie Jenner this year, who’s the special guest in the Season 3 premiere of her YouTube show “Who’s In My Bathroom.” The episode goes live later today, and involves Kylie and Hailey dressing up as Wicked Witches (complete with green face paint).

Reminder that last year Hailey dressed up as her icon Britney Spears:

Anyway! In other Hailey Bieber news, she recently opened up about her and Justin Bieber’s sex life during a very candid appearance on Call Her Daddy, saying she and Justin are “more so” night-sex people, and adding, “I do like morning too.”

She also said the sentence “I really like doggy-style,” and then noted that she and Justin have zero interest in a threesome. “It’s funny because I feel like those ideas can be really fun and sound really exciting…. It doesn’t work for the two of us,” she explained. “We, personally, like that wouldn’t work. I think sometimes for some people it does, so I’ve heard. Some people are in open relationships. It works for a time but I feel like in the end it always doesn’t end up working. So I think the second you make the decision to do that, there’s never going back from that, and I just don’t know that I would ever be willing.”

On that note, Happy Halloween!