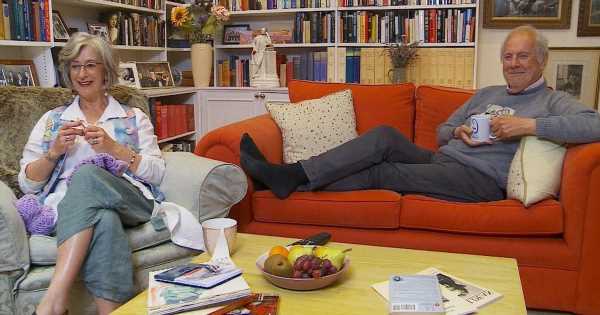 Gyles Brandreth has opened up about his friendship with Maureen Lipman in the wake of them starring on Celebrity Gogglebox together.

Gyles, 74, first appeared on the hit Channel 4 show in 2019 alongside actress Sheila Hancock.

However, Sheila decided to leave the programme after the first season, sparking Gyles to team up with Maureen Lipman instead.

As well as Gogglebox, Gyles has starred in shows like The IT Crowd, Have I Got News For You, Doctor Who, as well as being a regular face on This Morning.

Since featuring on the show alongside Gyles, both actresses have become dames – something which Gyles’ wife jokes is as a reward for putting up with him.

“Sheila was amazing,” Gyles continued to tell the Metro. “Sitting there watching Naked Attraction with an 89 year old was hilarious. And Maureen now comes round to watch the telly, even when we’re not filming it.”

Opening up about what it’s like filming with Maureen, Gyles previously revealed to Lorraine Kelly: “It's an amazing experience because they leave the cameras in the room, there's nobody else in the room, except me and Maureen two feet apart, and you get to watch and forget you're being filmed. And you watch hour after hour, some of the things we see, my goodness, we're certainly being moved out of our comfort zone."

As to why Sheila decided to leave the show, Giles quipped that it was because she’d “had enough” of him.

He told Radio Times last year: “Well, they asked Sheila and me to go on the canals, because Timothy West and Prunella Scales decided to retire from touring on canals.

“So I think Sheila felt that one series with Gyles in a year is enough, thank you very much.”

Gyles took the reins from Timothy and Prunella to front Great Canal Journeys in 2020.

Some have questioned if Gyles and Sheila were romantically involved, but Gyles is married to Michele Brown, whom he tied the knot with in 1973.

The couple share three children together – Benet, Saethryd, and Aphra.

For updates on all your favourite celebs, sign up to our daily newsletter here .