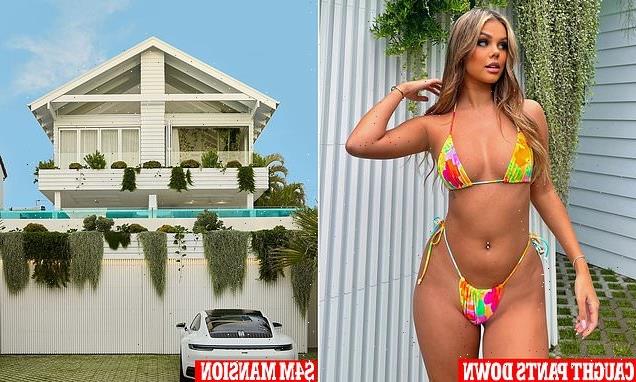 A Gold Coast influencer has been caught with her pants down after deciding to use a luxury $4million mansion as the backdrop for her bikini photos.

In the 10-second video, the bikini model is seen handing her phone to someone off-camera before dropping her jeans to her ankles to snap a photo.

Mr McDonald admitted he ‘knew what he was in for’ when he installed the stunning facade and admitted he would have failed if it didn’t attract some attention.

The homeowner noted that due to the privacy and seclusion of the home, he wasn’t too perturbed when people walking by made use of the Instagram-worthy entrance.

Ms Cheesman, who has almost 13,000 followers on Instagram, has the bikini shot set as her profile picture. 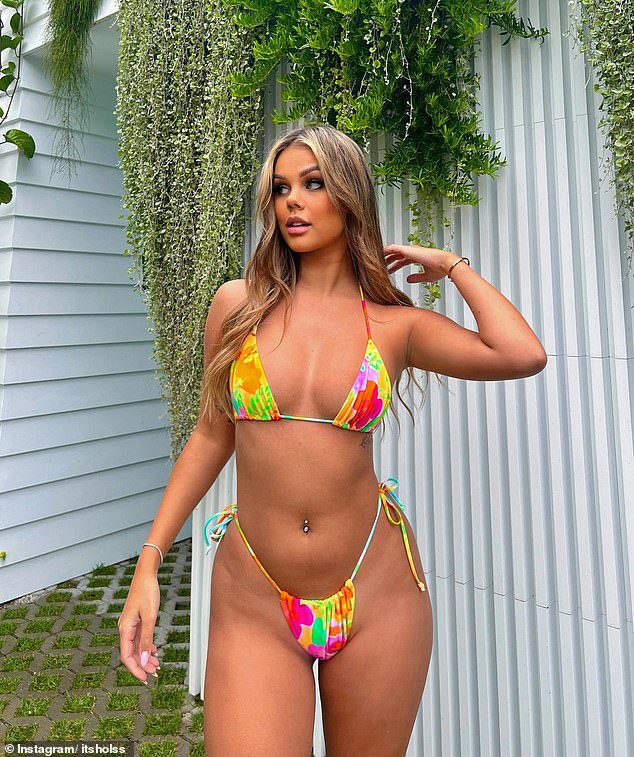 Nick McDonald, the owner of the sprawling beachside residence, caught budding influencer Holly Cheesman (pictured outside the home) posing up a storm on his home’s CCTV footage 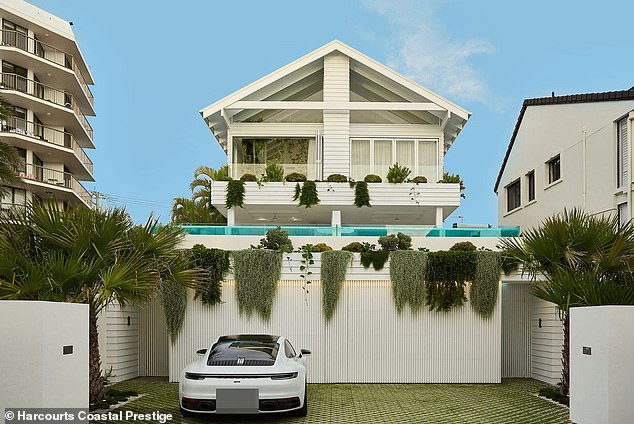 The property’s selling agent Ed Cherry, of Harcourts Coastal, said people could be pretty ‘ballsy’ when it came to capturing a photo at the show-stopping home (pictured from the front)

Those who come too close to the home are recorded on CCTV, with notifications sent to Mr McDonald’s phone to notify him of any activity outside.

He said the living areas are set back from the plunge pool and were an entire level above the street – offering inhabitants total privacy.

‘We designed it so it would be show-stopping,’ he told Daily Mail Australia.

The house was recently put up for sale with agent Ed Cherry, of Harcourts Coastal, joking people were ‘pretty ballsy’ when it came to taking photos at the show-stopping home.

He said influencers were drawn to the aesthetic of the home’s facade, which included hanging succulents, greenery and a glimpse of a glass bottom plunge pool.

Mr Cherry said Mr McDonald, the owner of Mactech Construction and the man who built the home, was understanding of how his beachside villa could attract some attention.

‘He understands it’s what comes with having a beautiful home,’ the agent said. 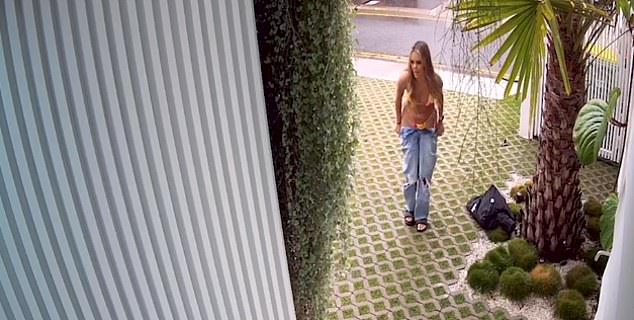 In the 10-second video the influencer is seen handing her phone to someone off-camera before dropping her jeans to her ankles to take a photo (pictured, the CCTV footage) 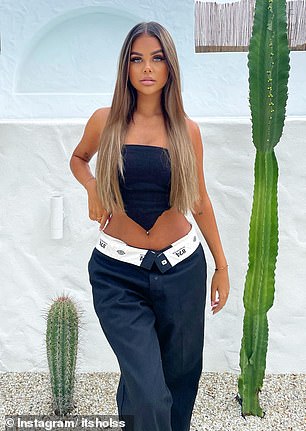 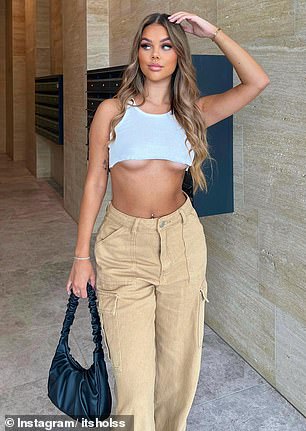 He likened the attention ‘Jefferson’ was receiving to a similarly breathtaking property ‘The Palms’ – once touted as Queensland’s most photographed home.

Mr Cherry said ‘The Palms’, which sits just down the road in Burleigh and was last sold to tennis star Lleyton Hewitt and his wife Bec in October 2021, was visited by admirers on a weekly basis.

Mr McDonald told realestate.com Ms Cheesman’s visit had been the ‘most bold’ yet and revealed the group had asked if they could take photos for a couple of minutes.

‘I pulled up and they kind of smiled and said, “you don’t mind if I get some photos here, do you?” then kept at it,’ the homeowner said. 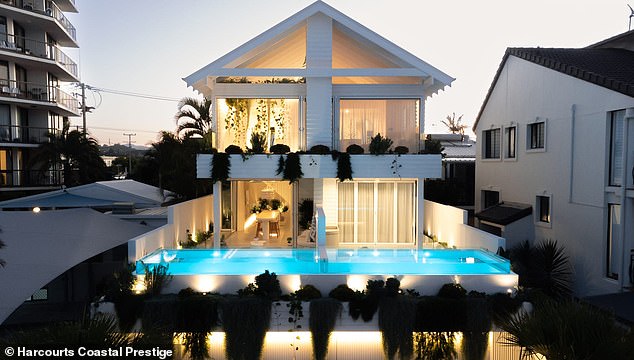 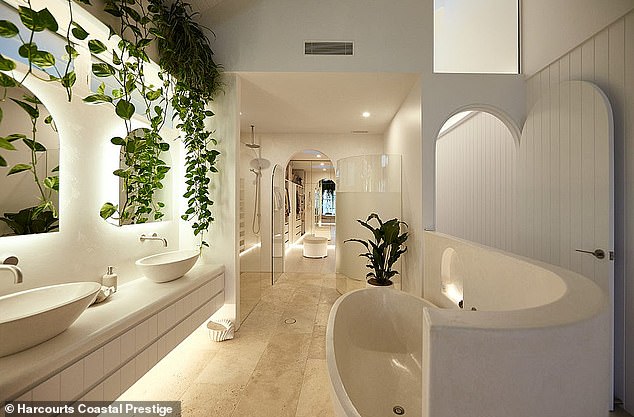 Mr Cherry said the show-stopping home – which is asking for offers above $4million – had already received interest from three potential buyers (pictured, one of the bathrooms) 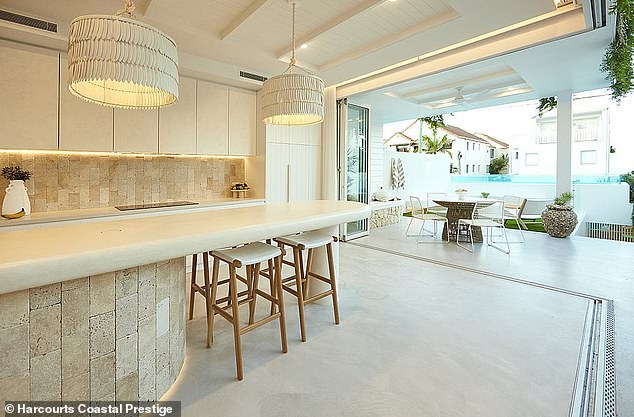 The beachside villa has received similar attention online and quickly became the website’s most viewed home after it was listed on realestate.com in June.

‘Upon entry you’ll be greeted by a feature grass paver driveway and low-maintenance irrigated waterfall of greenery that perfectly frames the pastel blues of your elevated glass bottom plunge pool in which you walk underneath while walking up the front travertine stairs,’ the listing reads.

Mr Cherry said the show-stopping home – which is asking for offers above $4million – had already received interest from three potential buyers. 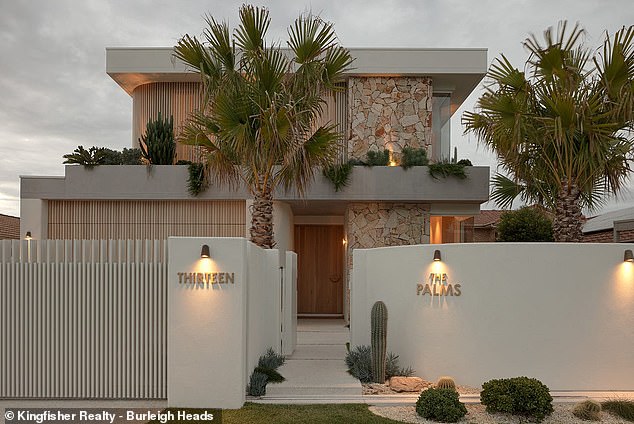