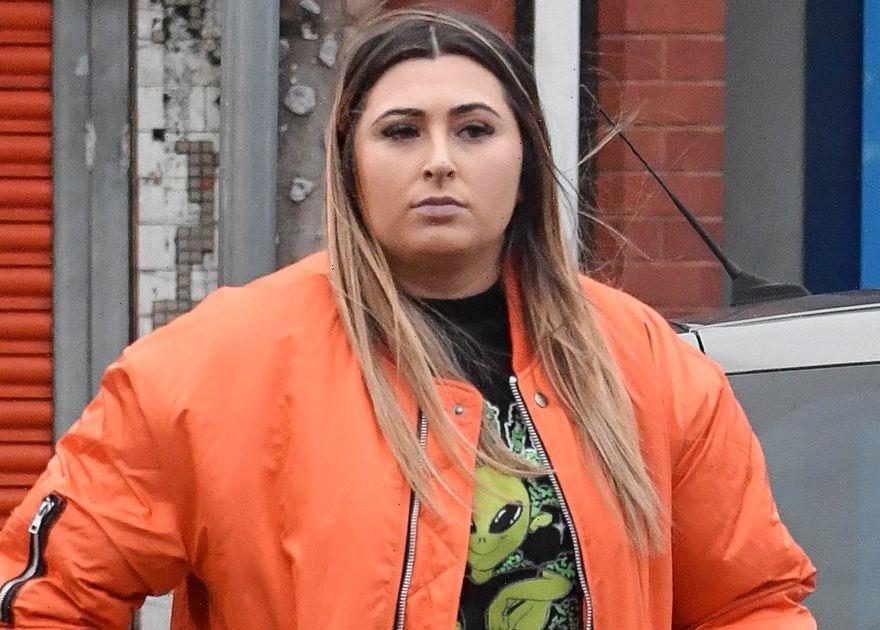 Sophie Sandiford has been photographed cutting a casual figure as she headed out to the nail salon in Blackpool.

The 24 year old, who found fame on the popular TV show Gogglebox alongside her brother Pete, was seen wearing a bright orange puffer jacket alongside a black jumper that had an alien illustration across it.

She paired the look with some black leggings and large black boots for the outing. Styling her blonde mane straight down, the star wore a full face of make up, including eyeliner and mascara alongside a nude lipstick.

After visiting a cash point, she made her way into the nail salon to get a fresh manicure in time for the weekend.

Her trip to the salon comes as Sophie has recently been seen more and more with her boyfriend Ben McKeown, even stepping out for their first public outing together as they were seen holding hands during a loved-up stroll.

Sophie introduced her new boyfriend to fans in March as she posted a photo of Ben with herself and her brother Pete, 26, and his wife Paige while attending a wedding.

The Channel 4 star’s famous great uncle Paul Chuckle of the Chuckle Brothers seemed to give his approval of the pairing as he commented: “Looking good guys great to see you all yesterday with @juliejohnson31 @cunny246 to celebrate Jack and @emma_louuise_ wedding…”

At the time, Sophie had not actually confirmed her new relationship, leaving fans questioning who mystery man Ben was.

Struck by his handsome looks, many were also taken by Ben’s tall stature which lead to an argument on a recent episode of Gogglebox as Sophie’s brother Pete clashed with her over her boyfriend’s height.

"You, first time meeting him 'oh, I thought you'd be taller,' as you looked up at him,” Sophie said. “And then saying 'I thought you were at least 6ft' when he is 6ft.”

Not convinced at Ben’s tall measurement, Pete replied: "He doesn't look 6ft…lies, already built on lies," as Sophie clapped back: "Just because he makes you look like one of the Borrowers!"

The Instagram post shared from the wedding proves that Ben certainly towers over Pete, who is believed to be roughly 5ft 8inches, but the latest snap from Sophie had fans weighing in on the argument whether he is under six foot or not.

“There is no way he is over 6ft," one person wrote on social media, adding laughing face emojis.

Sophie and Pete, from Blackpool, have been fan favourites and regulars on Gogglebox since 2018 and there's been a long-running joke between the siblings about Sophie's love life.

The pair are the great nephew and niece of legendary children TV comics The Chuckle Brothers and with their sharp whip and hilarious relationship on the show, you can see the family connection at work.

For all your updates on Gogglebox's Sophie Sandiford, sign up to our daily OK! newsletter.