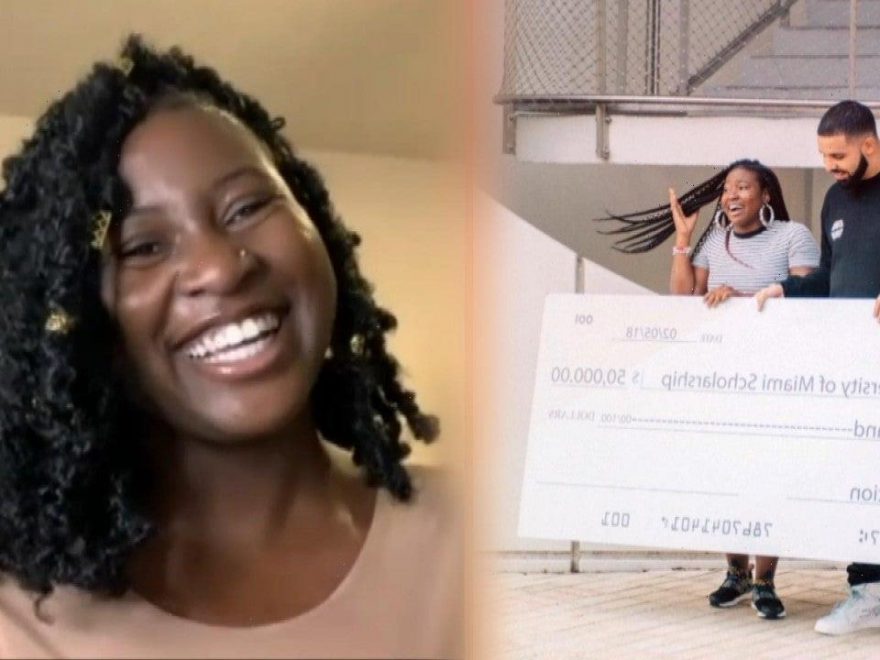 Destiny James is opening up about how Drake gave her the ability to just “live” as a college student. James, who was gifted a $50,000 scholarship by the rapper in his now infamous “God’s Plan” video, spoke to ET about the impact that moment had on her education.

“The biggest effect, is he gave me an opportunity to really just live as a college student without the financial burden that I had before the scholarship,” James, who was a junior at the University of Miami at the time, shared. “The scholarship went towards my senior year and it was hands down the best year I’ve had in college, because I didn’t have to worry about trying to work multiple jobs, to make sure that I have money. Or worrying about how my tuition bill was going to be paid, and if it’d be paid by the end of the semester, and if not, then my classes are canceled. So, all of these issues that I had prior to receiving that scholarship, they just went away.”

The surprise, which was caught during the filming of the music video, was completely genuine, James shared.

“They had me sitting there for five minutes and they were like, ‘We’ll give you your cue. Just look at this camera. Don’t look at anything else. Just try to focus,'” the now University of North Carolina grad said of the filming of what she thought at the time was a donor video for the school. “And I’m like, ‘I don’t want to be here because it’s thousands of students looking at me wondering why am I here?’ And he literally just walks out and walks directly up to me. So the video was live, real deal reaction. It was 100 percent a surprise. I didn’t know anything until he walked up to me.”

The life-changing moment allowed James to go on and earn her master’s degree, a moment she shared with Drake, just last week.

“When I sent him that I was graduating with my master’s this weekend, he responded immediately,” she revealed. “Before I could respond to his message, he was already on my picture, commenting and driving my page crazy. But he’s very genuine, even though we don’t speak on a regular basis. When we do, he’s very genuine, he’s very supportive. And he’s a super cheerleader, so that’s always great to get in contact with him.”

Watch the video below for more on the rapper and GRAMMY-winning song.