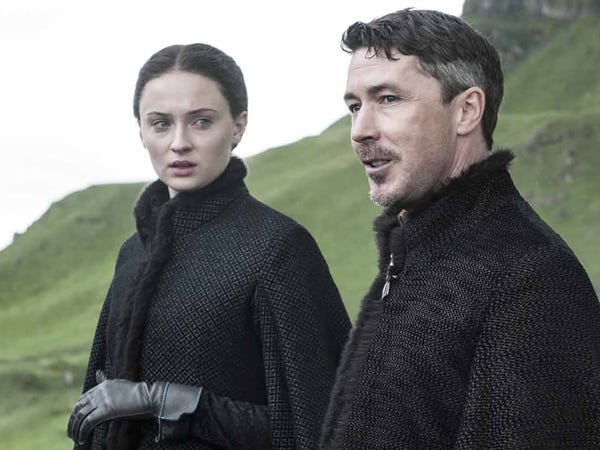 Ever since the fifth season of "Game of Thrones" premiered, fans have heatedly debated a major change made from George R.R. Martin's original novels. Instead of keeping Sansa Stark in the Vale, Petyr "Littlefinger" Baelish married her to the sadistic Ramsay Bolton.

In a new book by Entertainment Weekly's James Hibberd, "Fire Cannot Kill a Dragon," Martin emphasizes that this particular storyline would have never happened in his version of the characters.

"He's not going to give her to somebody who would do bad things to her. That's going to be very different in the books," he added.

Littlefinger's entire reputation in both the books and the show was his incredibly detailed knowledge of the inner-workings of most noble families in Westeros. That means he should have known that Ramsay was a direct threat to Sansa's physical and emotional wellbeing.

Back during season five, entire fandom discussions on Reddit  were dedicated to analyzing Littlefinger's motives: Did he care about Sansa at all or was she just a mere pawn in his game?

In season six, Sansa fully escaped Ramsay's clutches and confronted Littlefinger, voicing what many fans had been wondering all along.

But the show's in-universe explanation was simply that Littlefinger's intelligence had a big blind spot when it came to the Boltons. Littlefinger tried to apologize to Sansa, telling her he didn't know and that he had "underestimated a stranger."

"Ramsay's not known everywhere as a psycho," the show's coproducer and writer Bryan Cogman said in Hibberd's new book about the show. "Littlefinger doesn't have that intelligence on him. He just knows the Boltons are scary and creepy and not to be fully trusted."

In Martin's last-published book, Sansa is still in the Vale and Littlefinger married another girl to Ramsay instead

In the books, Sansa is still safely in the Vale while Littlefinger works his traumatizing machinations on a different young girl — Jeyne Poole.

Jeyne was Sansa's childhood best friend and grew up in Winterfell alongside the Stark children. She wound up in Littlefinger's custody, who in turn decided to use Jeyne's knowledge of Winterfell to pass her off as Arya Stark. So in the books, Jeyne (disguised as Arya) is the one married to Ramsay Bolton and used as a pawn to try and control the North.

Jeyne appears in one early "Game of Thrones" scene, seated next to Sansa during a feast at Winterfell. But she wasn't mentioned or seen again in the show. So when it came time to explore the Bolton's plot in the North, the showrunners used Sansa in her place. That meant Sansa, not Jeyne, was the one brutally sexually assaulted by Ramsay on their wedding night and tortured for many weeks afterwards.

"Not having Jeyne, they used Sansa for that," Martin said in the new book about HBO's show, which ended after eight seasons in 2019. "Is that better or worse? You can make your decision there. Oddly, I never got pushback for that in the book because nobody cared about Jeyne Poole that much. They care about Sansa."