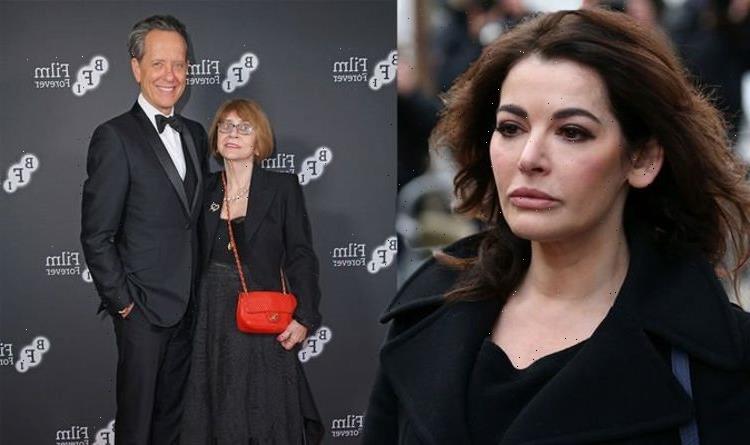 Richard E Grant, 64, has revealed how his close friend Nigella Lawson, showed her “generosity” during the final days of his wife, Joan Washington’s battle with lung cancer. The esteemed actor shared that the famous chef would prepare a special meal for the couple on a Sunday and would have it sent across to them in an Uber taxi.

Speaking on the cuisine he cooked for Joan when she was too weak to prepare meals, Richard said: “Joan gave me a Delia Smith book — that basic one which taught you how to boil an egg. Initiating my domestication.”

The Star Wars star began to enjoy making meals for his ill wife but was also delighted when his pal Nigella also offered some of their culinary comforts.

He continued: “It’s been my pleasure to cook twice a day for her over the past eight months, except for Sundays when our pal Nigella (Lawson) cooked, baked and Uber-ed her favourites over to us.

“Generosity and friendship beyond measure,” he added in his column on Daily Mail.

On 3 September he revealed his wife’s death, sharing a video of the pair dancing together to the song Only You on his Twitter page.

He wrote: “Joan – Love of my Life & Giver of Life to our daughter Olivia.

“Our hearts are broken with the loss of your Life last night. 35 years married & 38 together. To be truly known and seen by you is your immeasurable gift.

“Do not forget us, sweet Monkee-mine.”

The couple married in 1986 and share a daughter, Olivia, and a stepson, Tom, from Joan’s previous relationship.

The Loki star praised the oncology team at the Royal Marsden Hospital, NHS nurses, Price’s Mill Surgery and Longfield palliative carers for their “beyond exemplary” work.

Joan trained at the Central School of Speech and Drama and had nearly 40 years of experience working in the film industry as a voice and dialect coach.

Some of the people she worked with included Anne Hathaway and Emma Stone.

The couple met when Joan agreed to give Richard private voice lessons in 1982.

In a joint interview with The Independent in 2011, the actor recalled meeting his future wife for the first time.

“I met her at the Actors Centre in London,” Richard said.

“She was wearing a boiler suit and had fairly short, cropped hair and Kicker shoes, and was chain-smoking, which I thought was insane.

“She was teaching an accent session with a bunch of actors, and I thought she had the most wonderful voice and huge, sort of monkey eyes. She seemed fairly frenetic. I thought that she was really cute and all that. It was December 1982.”

The following January, she asked him to dinner in exchange for putting a script on tape for an RSC production she was voice coaching on.

Ahead of her funeral, Richard posted another tribute on Twitter two days ago, he typed” “35 years ago we pledged, ‘In Sickness and in Health’.

“That time has come for us today, @OliviaGranted & I and our friends gather for the funeral of my beloved wife, Joan.

“The depth of our sorrow mirrored by the magnitude of our love.” (sic)