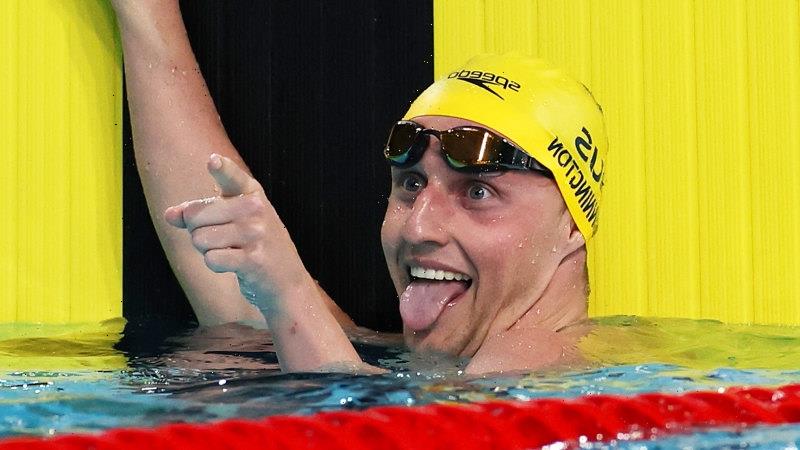 Australia’s swimmers have begun their Commonwealth Games campaign with a major bang on a golden opening night where the usual suspects flourished, and rising stars showed why they’re tipped for big things. 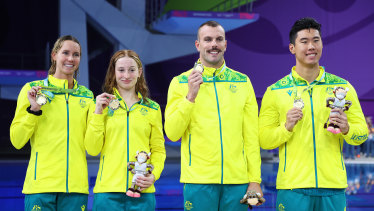 A haul of five golds, four silvers and two bronze medals in the pool catapulted Australia to outright top of the overall Games medal tally after day one with eight gold medals, five clear of New Zealand.

Winnington, a new Commonwealth Games champion, is getting better at making winning a habit and insists he’s the hunter, not the hunted, with a world record firmly on his mind after admitting he almost quit the sport last year.

After a shock seventh place in Tokyo, Winnington has buried the demons of a painful maiden Olympics by clinching 400m crowns at last month’s World Championships and now the Commonwealth Games.

Australia went 1-2-3 in two of the first three events on Friday, with Winnington (three minutes, 43.06 seconds) edging out teammates Sam Short (3:45.07) and 2016 Olympic gold medallist Mack Horton (3:46.49) to make it a trifecta of smiling athletes in gold jackets arm-in-arm on the podium.

Winnington is known for his fast starts but even by his standards, he powered through the pool at pace. At the 300m mark, Winnington was still under world record time, but finished 2.99 seconds adrift of the mark set by Germany’s Paul Biedermann in a supersuit in 2009.

“My mind coach and I always say it’s pretty hard being the hunted but having that world record there means I’m still the hunter,” Winnington said. “I’ve got something to chase. I’m always striving to be better.

“I took them out hard and played to my strength. It paid off. That’s the way I always swim it.

“It was really tough coming off the back of Tokyo. I almost wanted to quit the sport. I decided to keep going, and I put myself and my mindset in the right spot to achieve what I’ve achieved this year.”

Horton was reasonably happy with his performance.

“I still believe I can be faster,” Horton said. “If I didn’t believe I could be faster I probably wouldn’t still be swimming to be honest.”

Within minutes, the cohort of Australian squad members sitting poolside voiced their delight when Titmus, Mollie O’Callaghan and Madi Wilson made it another 1-2-3 in the women’s 200m freestyle final.

Titmus was tipped to go close to Federica Pellegrini’s world record of 1:52.98 but was nearly a second off the pace in 1:53.89. After gold medals in her 400m and 800m races four years ago on the Gold Coast, Titmus now has the full set in her preferred events. 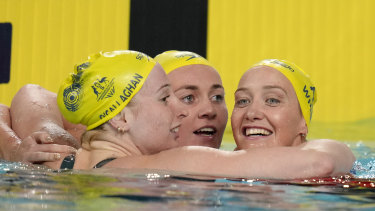 More surprising, however, was the lightning-fast finish of training partner O’Callaghan, who touched the wall 0.12 seconds outside Titmus. She will be a seriously dangerous prospect come the 2024 Olympics.

Para-swimmer Hodge stormed home to take gold in the 100m backstroke final (S9), while Kiah Melverton helped make up for the absence of Kaylee McKeown in the 400m individual medley by picking up a silver medal.

Meanwhile, it was far from a walk in the park for reigning Olympic champion Stubblety-Cook but a calm final 50 metres was enough to see overcome England’s James Wilby in the final stages by 0.52 seconds at the final touch, just outside his own world record set at the Australian trials.

“It was a star-studded field,” Stubblety-Cook said. “[There was] a little bit of panic. It felt harder than I thought it would. 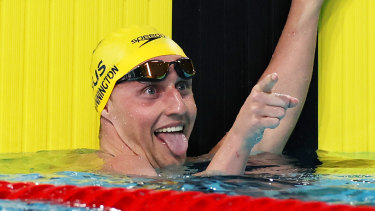 “I think this probably means a lot more to me than worlds did. Four years ago, I didn’t make the final, so coming here tonight was purely enjoyment. It was a bit of a redemption swim for me.”

While a world record could have been on the cards, Australia (3:21.18) comfortably won the mixed relay in a slower time than they would have liked with a team of William Yang, Kyle Chalmers, O’Callaghan and Emma McKeon, ahead of England (3:22.45) and Canada (3:24.86).

“It’s been a really good night for Australia,” Stubblety-Cook said. “Hopefully it continues to progress and we have plenty more great events to come and classy swimmers to come.”

Meanwhile, Cody Simpson will have to put all his energy into the 100m butterfly after he and two other Australian competitors missed out on qualifying for the 50m butterfly final.

Simpson’s sixth place, in 23.87, was respectable but not enough to get him into the last eight. The same went for close mates Matt Temple and Chalmers, who will also favour the 100m event.

Get all the latest news from the Birmingham Commonwealth Games here. We’ll be live blogging the action from 4pm-10am daily.