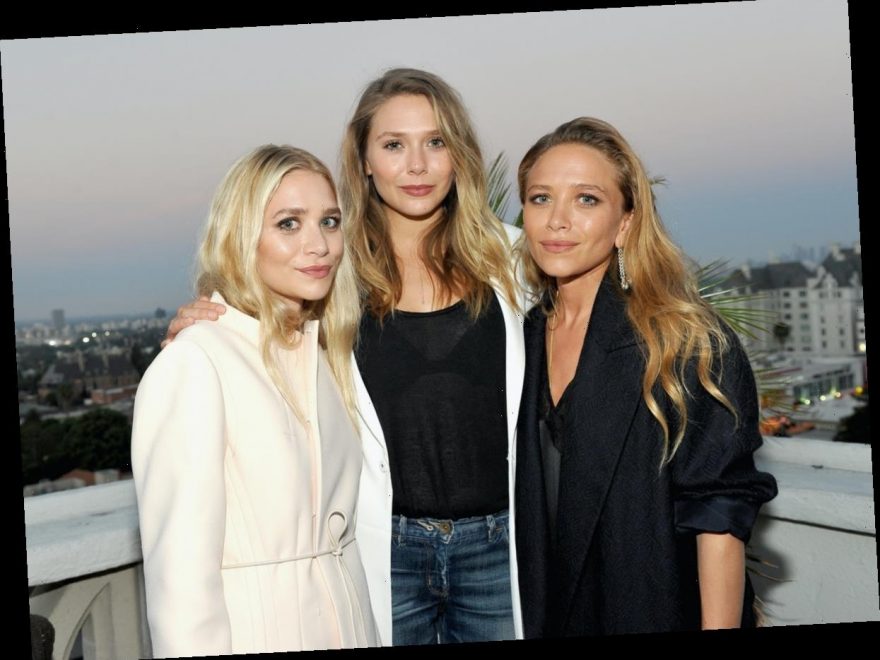 Elizabeth Olsen isn’t above playing into Full House jokes. On Tuesday, Jan. 5, the actress made an appearance on Jimmy Kimmel Live! to talk about WandaVision, the new Disney+ series in which she and Paul Bettany play Wanda and Vision, two characters from the Marvel Cinematic Universe (MCU) suddenly thrust into the world of classic sitcoms. While specific plot details remain secret, Kimmel grilled her about Easter eggs and fan theories. And it was Olsen’s smooth reaction to a silly theory about Mary-Kate and Ashley that proved how lovable she is.

Kimmel first addressed theories that definitely sound substantive, like one that points to the dots in and outside of a rectangular graphic on Vision’s tie. Fans believe it means the two main characters are trapped somewhere. He also asked about whether the Maison du Mépris wine bottle seen on-screen hints at the possibility the show is based on the House of M comic. “The thing is, all of these Easter eggs, even if they were real, they would go way above my head, so I have no idea,” Olsen said.

While she remained coy about the first two, she then had an animated, perfect reaction to Kimmel’s third and final theory, which, uh, isn’t a theory at all. “Wanda bears a striking resemblance to these actors who played the role of Michelle Tanner on a sitcom from the ‘90s called Full House, which would mean Uncle Joey is about to join the MCU,” Kimmel said, flashing a photo of her twin sisters. To that joke, Olsen couldn’t help but smile and laugh, telling Kimmel, “That would be incredible. It is very meta, the whole thing.”

Aside from the potentially far-fetched (and completely obvious) theories addressed, Olsen did provide some background about WandaVision. “I can say it’s Wanda and Vision living their suburban sitcom dreams,” she said, confirming the series jumps from one decade to the next. “Yes, we cover all of [the] American sitcoms, starting with the ‘50s à la Dick Van Dyke and we progress until the aughts, and there’s a reason for it, it’s not just a fun trick we do.”

She continued, “We try to film each episode as authentically as we could to each decade. And in the ‘50s we filmed in front of a live studio audience filled with so many NDAs. It was really strange and fun, and had practical special effects on strings. The whole thing was just so silly and so much fun.”

In an interview with Entertainment Weekly, Marvel Studios president Kevin Feige confirmed the series will directly set up 2022’s Doctor Strange in the Multiverse of Madness (also starring Olsen), making it must-see TV for Marvel fanatics.

WandaVision will stream on Jan. 15 on Disney+.