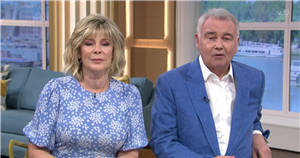 Eamonn Holmes has revealed he's become a grandfather at the age of 61.

The TV presenter made the announcement on This Morning as he told viewers: "My son Declan and his wife Jenny, they're the happy couple. Jenny gave birth to Amelia, who is 7lbs and 6 ounces.

"That's my first grandchild, my mother is a great grandmother."

His wife Ruth Langsford then questioned what he would like to be called in his new role as she said: "What are you going to be, gramps, grandad? Grumps we came with up, didn't we? But he didn't seem too keen on that one."

To which he responded: "It surprises me because people come up to me and say, 'He's too young to be a grandfather….'" Eamonn continued: "I've got people getting in touch with me about glamorous grandad competitions and all kinds of things like that but my friend Bill has anointed himself Papa."

Eamonn then joked: "It's like the Pope, there's an infallibility goes with it, so I'd quite like my grandchildren to call me Papa."