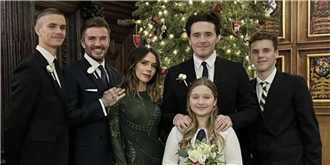 David Beckham and Victoria Beckham dropped a super cute new family portrait to celebrate the holiday szn this year, and fans immediately zeroed in on one specific detail. Ahem, the fact that David appears to be on his tip-toes. Here’s the pic if you want to zoom in and analyze:

To be honest, it looks like David might just be wearing a heeled boot which is causing the bend in his shoes to look like he’s on his tip-toes, but either way fans in the comments are in a state of lol:

David hasn’t responded to his commenters, probably because he’s too busy chilling with his family, etc. And speaking of his family, in case you have no idea who’s even whomst in this photo due to them all looking like mini versions of their parents, it goes like this: David and Victoria’s oldest son Brooklyn has his hands on their daughter Harper’s shoulders, while Cruz is on Brooklyn’s right. Meanwhile, Romeo is standing next to his dad.

In other news, here is a very important photo of David Beckham hanging with a fleet of dogs wearing “Ho ho ho” sweaters:

And another equally important photo of David Beckham holding a cup of coffee and wearing a Santa hat in the English countryside: