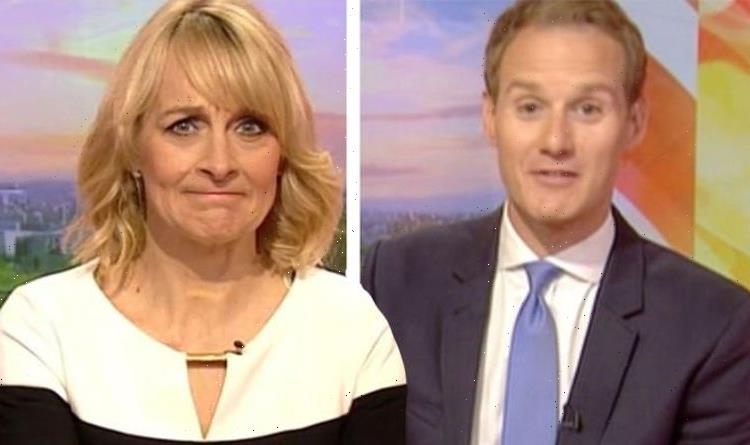 Dan Walker, 44, congratulated a new colleague who announced they would be joining the BBC Breakfast team. Katie Saoirse Bryson revealed she’s starting as a Technical Operator for the programme.

Taking to Twitter, she penned: “Now my two year apprenticeship is over I’ve joined the @BBCBreakfast and @BBCNWT teams permanently as a Technical Operator.”

Dan has bid farewell to a fair few colleagues recently, taking to his social media to wish them all luck in their new ventures.

One was JJ Chalmers, who presented the Tokyo 2020 Olympics.

The 34-year-old shared his joy at being a part of the broadcasting team as the Olympic Games came to an end.

“It’s been a Marathon and that’s exactly what we’ve got for you tonight on @BBCOne from 2230. Enjoy. #BBCOlympics #OlympicGames.”

Dan, who had also been hosting the BBC’s Olympics morning coverage, was one of the first to reply as he offered some kind words to his colleague.

“Go well big man. It’s been lovely to see you every morning at 5am,” the host tweeted.

It all comes after Dan’s co-host Louise Minchin announced earlier this year that she will be leaving BBC Breakfast after almost 20 years.

She first presented the programme in 2001 and became one of its lead presenters in 2012 when they moved to Salford.

She told viewers live on-air that she had loved being on the show but “it is time I stopped setting my alarm for 03:40”, and is now looking forward to “lots of lie-ins”.

Louise said she would leave “some time after the summer” and would take “lots of happy memories” away.

“We’ve had fun times. We’ve had some incredible guests,” she smiled.

“I love hearing people’s stories, I love being able to tell their stories.”

Asked what she would do next, she replied: “Anybody who watches will be very well aware my passion is endurance sport, and I will absolutely continue to do that. I’ve got lots of really exciting adventures planned.

“I’m trying to write a book about that as well.

“And I’ll continue with my podcast, which is all about the mental and physical benefits of sport and exercise.

“And I’ll be having lots of lie-ins. That’s what I’m most excited about right now!”