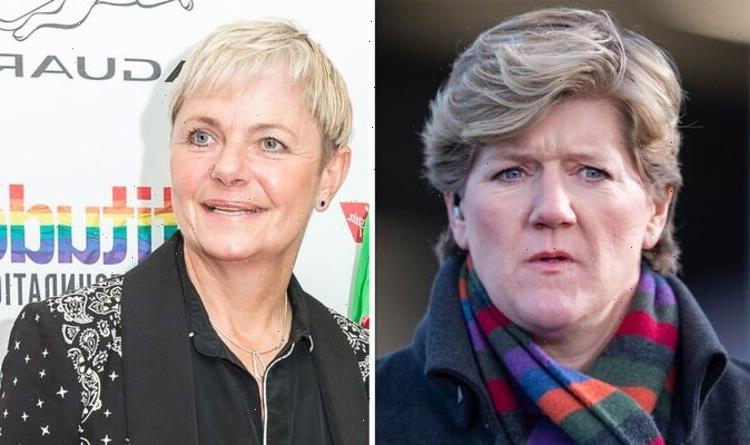 Alice told worried fans, who were quick to comment on Twitter and share their concern, that Clare’s wedding ring had been left at home for safekeeping.

This was to prevent it from being lost abroad.

@LizziejackLiz said: “Why is Clare balding not wearing her wedding ring?” followed by a thinking face emoji.

The couple met in 1999 when they both worked for the BBC.

At the time, Clare and Alice had been married for 10 years.

Alice took to Twitter to clear up all of the confusion about the wedding ring.

The broadcaster and journalist was surprised that there was so much drama surrounding the missing band, which was “at home” in the UK.

She posted on the microblogging site: “I’m amazed how many have noticed @clarebalding is not wearing her wedding ring…don’t worry…it’s safely at home with me.”

In response to speculation, the ex-Radio 4 newsreader added: “Was advised not to take it with her…don’t worry…it’s safely with me.

“I’m sure it would be fine…but wise not to wear irreplaceable jewellery,” Alice said.

Meanwhile, @KatBlackburn shared that she felt she could relate: “I always get paranoid about losing my wedding ring too and leave it hidden at home when I go on hols!”

Earlier this year, Clare Balding presented the highlights of the Winter Olympics, Beijing 2022 on Today at the Games with Clare Balding.

The show was on BBC Two last month.

Clare has reported on seven Olympics Games for the BBC and four Paralympic Games and Winter Olympics.

Clare’s wife Alice has spoken out about becoming increasingly concerned about becoming the “housewife” to her spouse when Clare initially became successful.

Alice said in a 2018 interview with The Times that she was unsure whether to enter into a relationship with Clare.

She said: “To begin with I was especially concerned that Clare was in the media spotlight.

“I didn’t want to be with someone who needed looking after.”

“I didn’t want the imbalance of being the housewife to her success.”