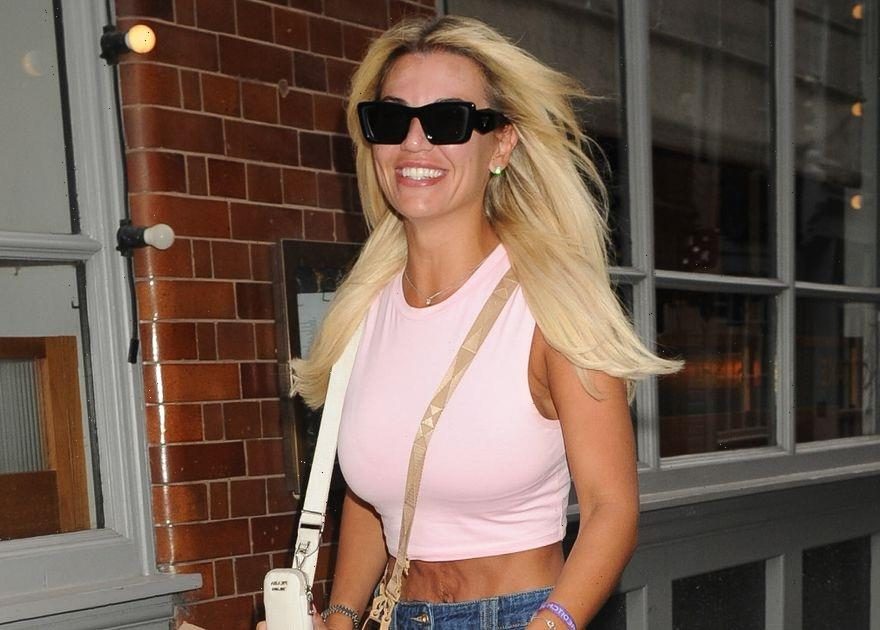 Christine McGuiness looked as though she was back to her cheerful self as she was snapped out in Shoreditch.

The former model was reportedly enjoying a day of pampering at a local hotel with a roof top pool.

In the photo, Christine could be seen showing off her slender figure in a pink crop top and blue denim shorts.

Over her shoulder she wore a cream Prada handbag and on her feet she wore a pair of bright white Nike trainers.

She accessorised her outfit by wearing a pair of black chunky sunglasses, a delicate diamond necklace and a silver watch.

The snap comes after the 34 year old previously admitted to Fabulous Magazine that she and her husband Paddy McGuiness were "having a very, very difficult time".

At the time she added: "It’s just — we’ve been together 15 years, 11 years married: we are gonna have ups and downs — but this situation at the minute — I don’t want to go into it too much but I will just say that I didn’t cause this situation.

"What I might have put up with in the past, I probably wouldn’t put up with now, and the same for him. I'm feeling really quite raw and all over the place."

More recently, she appeared on Lorraine, telling stand in host, Carol Vorderman, that the couple were "trying to deal with things as privately as possible".

She said: "I think marriages go through ups and down anyway. All marriages, especially long ones like ours. 15 years together.

"It's not always going to be plane sailing. We’re trying to deal with things as privately as possible. We both just want to be there to support the children and give them an amazing summer.

"We are going away on a family holiday next week and we are really excited about it. They are always going to be our focus. That's the most important thing to us."

Top Gear's Paddy has tried to paper off the cracks by telling his wife that she would be getting cuddles on his return from Thailand.

The doting dad, who shares three children with Christine, appeared determined to put things right after he commented "Cuddles tomorrow!!!" beneath one of Christine's Instagram posts.