Chrissy Teigen and John Legend stepped out for a kid-free date night in West Hollywood, coordinating in chic black ensembles.

Chrissy Teigen, 35, stunned in a little black dress on a romantic dinner date with husband John Legend, 42! The Cravings author opted for a silky satin mini as she stepped out in trendy West Hollywood on Tuesday, Aug. 3, pairing her look with a matching chic suede handbag, gold sandals and a protective face mask. Her complexion and legs were glowing with a golden tan as she exited a vehicle, channeling the same beach vibe with her wavy, side-parted hair style. 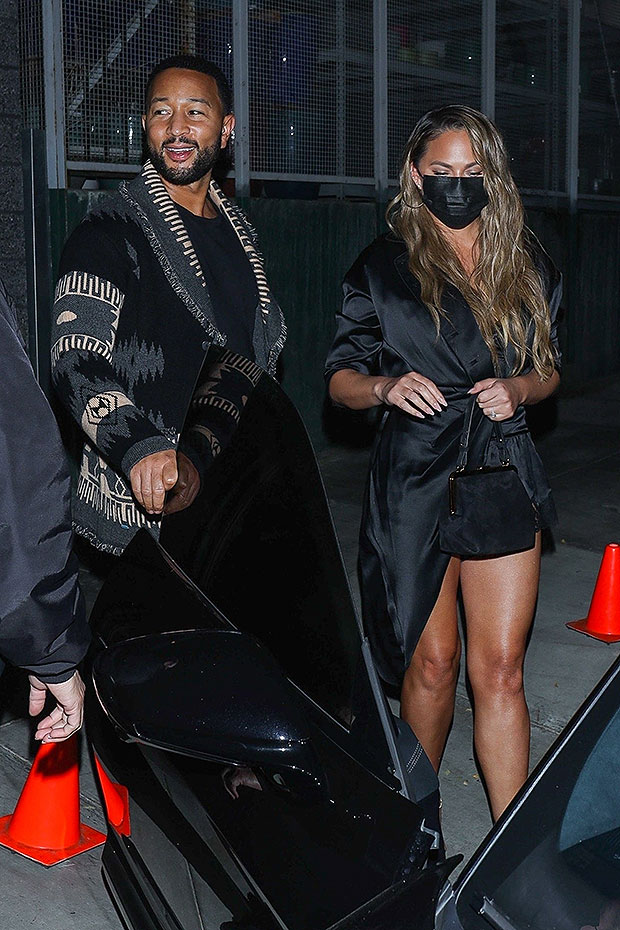 She and John were photographed exiting the restaurant and heading back to their SUV vehicle without their two kids Luna and Miles. The “All Of Me” singer mirrored Chrissy’s all-black ensemble with a black t-shirt, pants and Cowichan style sweater that included a gray and cream colored pattern. John was a total gentleman as he sweetly opened the car door for his wife of eight years, smiling for the cameras.

Chrissy has kept a somewhat low profile since bullying allegations were made against her by Courtney Stodden and fashion designer Michael Costello. Amid the drama, Chrissy deleted her Twitter account for several weeks — eventually breaking her silence with a post about “cancel culture” via Instagram.

“Just feels so weird to pretend nothing happened in this online world but feel like utter shit in real life,” she wrote in her post, referencing the many Tweets and comments she received calling her out over both allegations. “Cancel club is a fascinating thing and I have learned a whollllle lot…If you or someone you know has also been cancelled please let me know if there is a cancel club reunion because I could use some time off my couch!” the former Deal or No Deal model expressed.

The social media personality also recently took to Instagram to reveal the intense scars she was left with following her a procedure to remove her breast implants, which she did last year. “Gonna keep lifting them, ’til the end of time,” she jokingly sang in an Instagram story on Thursday, July 29, thanking her plastic surgeon Dr. Garth Fisher.