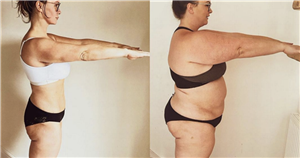 Chanelle Hayes has shown off her seven stone weight loss in new before and after photos after revealed she underwent a gastric sleeve operation.

The 33 year old Big Brother star shared a before and after photo of her posing side-on with her arms held up to show off her progress in a new Instagram post.

Chanelle’s pictures show her dressed in underwear, with her hair tied up to show the extent of her transformation, which she shared on Wednesday 5 May.

Writing above the image, Chanelle explained she weighed 242lbs (17 stone) in the first image and 141lbs (10 stone) in the second photo.

In the caption Chanelle, who recently apologies for a “totally inappropriate” weight loss post shared after Nikki Grahame’s death, candidly opened up on her recent weight loss surgery.

She wrote a lengthy caption on the five lessons she has learned since her surgery.

Chanelle revealed that her operation has “not changed her relationship food”. She added the op is a “tool” that if it isn’t used “consistently and correctly it will fail”.

She added the second lesson was “not everyone will understand my choice and that’s ok because it is MY journey”.

Chanelle said she also sees exercise “differently” and shared her next lesson was that “weight looks different on everybody”.

Finally the reality star said she feels she has “grown as a person” on her journey. She told fans: “I have been every size you can think of and can empathise with the issues that come with them all.

“I realise people may plaster on a smile – at any size – but not be ok beneath the surface.

“Going through this experience has really given me a better understanding of private struggles and how easy it is to hide them.”

Chanelle ended her post by writing: “Thought I would share this today on #womancrushwednesday because my #wcw this week is ME… and I don’t think I’ve ever been able to say that before.”

The Big Brother star’s post received more than 7,500 likes from fans. While many fans commented to praise the star on her recent transformation.

Another added: “You look amazing!!!” While a third wrote: “Absolute Wow!!!”

It comes after Chanelle revealed she underwent a gastric sleeve surgery earlier this year, after she went up to 17 stone.

Speaking to The Sun Online, Chanelle revealed she didn’t want to see or speak to anyone for a year due to her weight.

She said: “It was horrendous. I didn’t want to see or speak to anyone. I didn’t even want to leave the house or go anywhere – I was like a hermit in my home.”

Chanelle then turned to doctors last year to discover her options after struggling to stick to a diet and feeling “out of control”.

Speaking of the op, she said: “I wish I had done it years ago. I am so happy; I don’t remember ever being this happy or content with where my life is going in every aspect. Not just looks, because it’s had such a huge impact on my mental and physical health, it’s absolutely changed my life.”