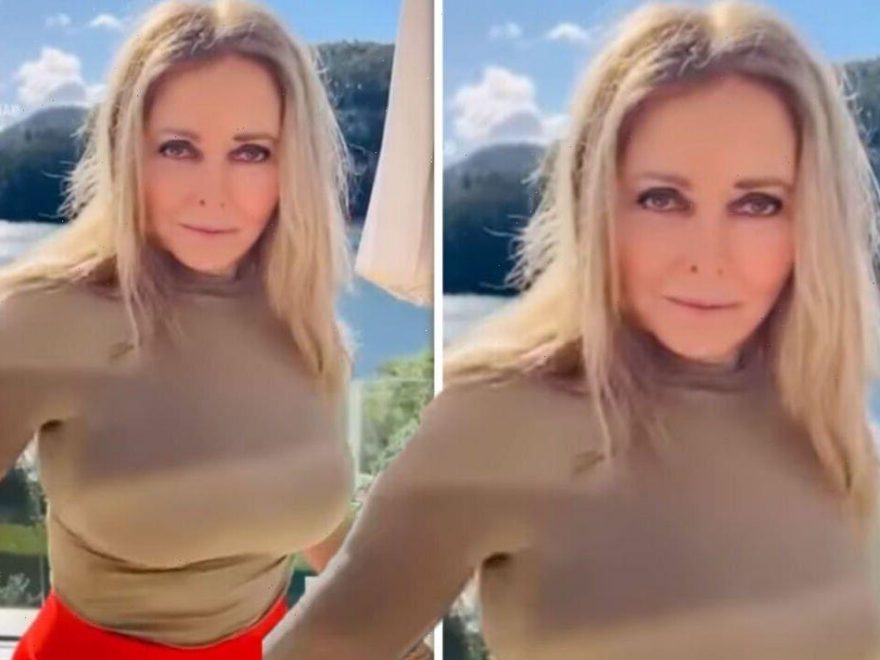 Carol Vorderman sizzled as she donned a tight ensemble in the throwback video first shared by This Morning’s Alison Hammond today. The Countdown legend showcased her incredible curves in the cheeky clip which featured some familiar faces, including Judge Robert Rinder, Denise Welch and Alex Scott.

The age-defying could bee seen sporting a fitted beige top in an eye-popping display which she teamed with a pair of bright orange leggings.

Carol explained she attended a health retreat last summer and was joined by a host of famous faces.

She captioned the clip: “LAST DAY AT JUICY OASIS @jasonvale.

In the video Carol could be seen giving a smouldering look to the camera as her blonde tresses hung over her shoulders.

The TV star donned dark eyeliner with a nude lip as she gave a little dance to the camera.

Also seen in the video was BBC’s Alex Scott shaking her long braids, while ITV favourite Alison performed a two-step routine, Judge Rinder gave a smouldering look to the camera while Loose Women’s Denise swayed throwing her hands in the air.

Social media users flocked to the comment section as they gushed over Carol’s appearance.

Aron wrote: “Carol you really are a magnificent woman.”

Pearl penned: “Looks like you’re having a ball,” while Tech added: “You are the brightest Carol.”

This Morning’s Alison also shared the video with her 1.2 million followers receiving close to 10,000 likes in under an hour.

Carol recently jetted off to Portugal for a juice retreat and previously shared photos from the vacation.

Juicy Oasis is a seven-day retreat and have a range of facilities to offer to guests.

A typical day consists of meditation, followed by yoga, then a walk and circuit training.

Guests then have juice, a spin glass and another session of yoga.