Breakups are already hard enough as it is, but having to go through one in public probably makes the experience 100 times worse. Such is the case with Camila Cabello, who recently ended her year-long relationship with author and relationship coach Matthew Hussey. After the news made headlines, her fans got a little too protective and began flooding Hussey’s Instagram with hateful comments, so the singer she did what she had to do: Camila Cabello asked fans to be kind to Matthew Hussey, because even though they’re not together any more, that doesn’t justify any internet hate.

On Wednesday, June 26, news broke that Cabello and Hussey had broken up after over a year together, according to Us Weekly. While fans of Cabello were sad to hear the news, the situation quickly escalated when the 22-year-old noticed her fans were saying hurtful things to Hussey on social media. She then took to her Instagram story to share a meaningful message to all her followers. 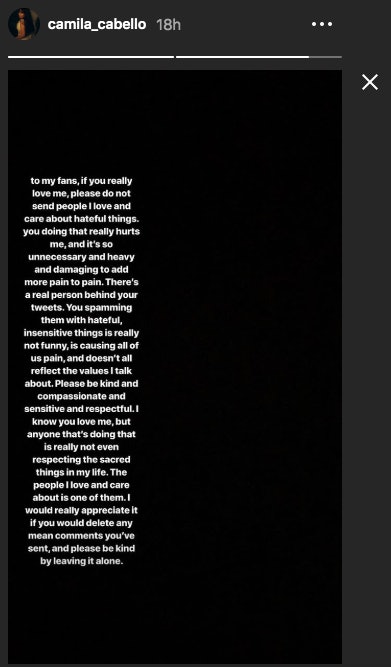 While the details of their breakup remain sparse, Cabello seemed head-over-heels for Hussey when they first got together. Speaking to Marie Claire for the magazine’s November 2018 issue, she revealed how hard she’d fallen, and why. "He’s so similar to me," she told the publication. "In person, we’re just weird and silly and stupid together. He makes me the happiest I’ve ever been in my life."

Now that the two have ended things, fans jumped to Cabello’s defense, but according to her Instagram story, it wasn’t necessary. Many have long fantasized that she would start dating Shawn Mendes (the Shamila ship is so real), but seeing as she’s currently going through a breakup, shippers shouldn’t hold their breaths (despite the chemistry between them in their new single and music video, "Señorita").

The video has racked up over 100 million views in less than a week, and fans are understandably obsessed.And sure, Cabello and Mendes’ chemistry is fire, but that doesn’t mean they’re together, and it surely doesn’t justify any hurtful comments toward Hussey. It seems like coming to her ex’s defense is proof she still cares about him, so hopefully, there are no hard feelings.