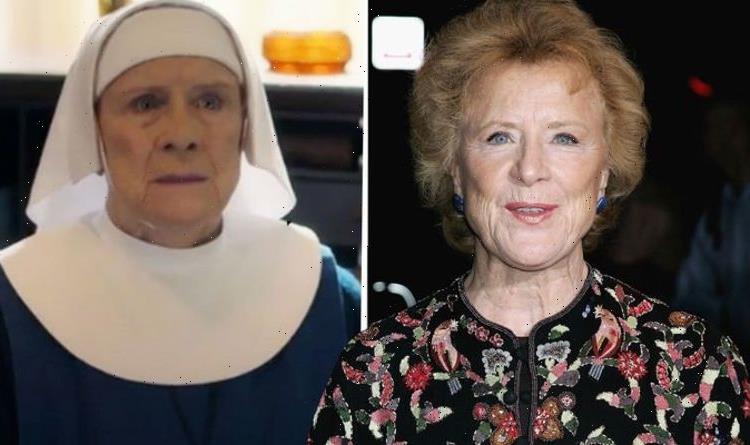 Call The Midwife star Judy Parfitt has been playing Sister Monica Joan since the show launched in 2012. In a new interview, the 86-year-old discussed her almost decade long on the BBC series and what her future holds.

The actress admitted she was surprised her character was still alive and hoped she’d continue playing her for as long as possible.

On whether she had plans on retiring, Judy spilled: “I think about hanging up my wimple because it’s uncomfortable to wear, but not retiring!

“But, as long as I can walk a straight line and remember my words, I’ll be there.”

On the show, nun Monica lives full-time at Nonnatus House where she is cared for her sisters.

The actress believes it’s her character’s “innate innocence, kindness and struggles” that make her popular with viewers.

She added: “She’s obviously educated, she uses words nobody else uses anymore.

“And, of course, has a love of cakes and biscuits,” she added to Saga Magazine.

Judy went on to say her character’s love for the treats has prompted many to offer her them in real life.

Fans of the show were previously left concerned for Monica’s future after her eyesight and memory faded.

The actress said of the moment: “She is absolutely panic-stricken and thinks she’s going to pop her clogs.”

However viewers needn’t to worry just yet as she will be returning to the Christmas special next month.

The actress said Christmas at the Nonnatus House is their “busiest ever”.

“Sister Monica has her own suspicions as to why it’s so busy,” she spilled.

Further episodes will be aired in early 2020.

Away from the show, Judy will be spending quality time with her loved ones at Christmas.

The BBC star will share the day with her son David, his wife and their children.

Judy has only child David with her late husband Tony Steedman, who died in 2001.

The actor had been battling vascular dementia.