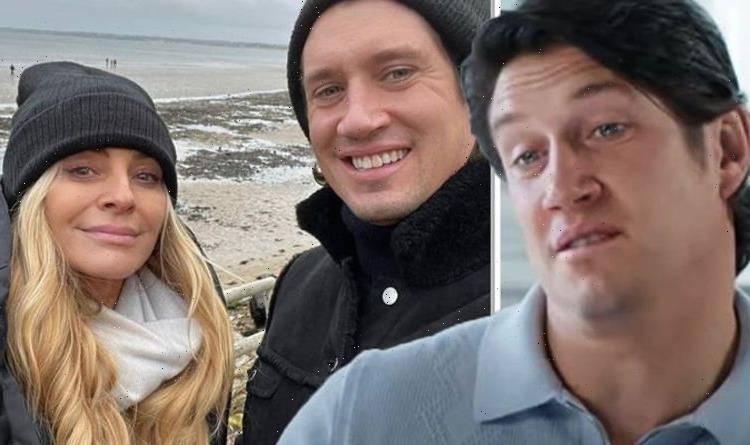 Tess Daly admits she has a 'crush' on Dwayne Johnson

Tess Daly’s husband Vernon Kay has responded to a warning he received from a social media user during a day out at the beach with his wife. The Game of Talents presenter, 47, revealed that he was shocked after an Instagram user warned him about a nudist beach located nearby to where he was enjoying views of the British coastline with his wife and two daughters, leading the TV star to address whether he would be stripping off for a quick dip in the English Channel.

Posting a series of sweet snaps in view of his 713,000 followers, Vernon told how he was starting the new year with a beach break.

He wrote: “Wrapped up warm (again!) this time beach stroll down in Dorset.

“Stunning scenes on the beach.

“Studland bay was used as part of the rehearsal for DDay,” he explained.

He went on: “Fort Henry was a look out over the bay.

“You can tell I have a fave hat and jacket combo!!” he ended the post.

He posted a sweet selfie alongside wife Tess, who was also wrapped up against the icy cold weather.

In another picture, he captured beachgoers on the shore.

However, the star was soon left stunned following a warning from an Instagram user.

“Pretty sure there is a nudist beach at Studland…,” they told the TV star.

Shocked at hearing that people would be taking to the sea in their birthday suits in January, Vernon wrote back: “B****y hell! Not today it’s freezing!!!”

Another Instagram user also alluded to the nudist beach, leading Vernon to rule out a quick dip in the buff.

@Bex352001 penned: “Chilly down the far end of Studland beach,” they commented with a winking face emoji.

Vernon replied: “Not a chance!!” alongside multiple laughing emojis.

Tess had also taken to Instagram to document her family’s day at the beach.

In her stories, the Strictly star told her 797,000 followers: “A little family trip to the beach was the perfect start to 2022, but the girls are back to school tomorrow.”

Tess and Vernon share two daughters, Phoebe and Amber, together.