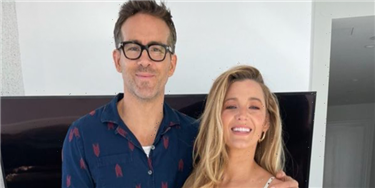 It's been 10 years since Blake Lively and Ryan Reynolds went on their very first date, and a decade later not much has changed. The city, the restaurant, the playful banter — it all has stayed the same. In celebration of their special milestone, the couple recreated their initial meeting in 2011 at o ya restaurant in Boston, and, of course, they trolled each other in the process.

Over on Reynolds's Instagram, he shared a selfie of the pair outside the sushi bar, writing: "Our favorite restaurant with her 4th favorite date." And while a zinger like that came as no surprise, he pulled off a less-obvious dig by cropping out Blake's earrings in the post. "Posting this again because I cut out my wife's cute earrings. She trained me better than this," he wrote over his own face, adding: "Sorry if I let anyone down." In addition to Blake's incredible jewelry, she wore the perfect black and white polka dot dress for the couple's date night, and left the bottom row of buttons loose for a DIY high-slit. "10 years later. We still go out on our 'first date.' But in much more comfortable shoes," Lively wrote next to a full-length shot of her and Ryan, who paired a blue button-down with jeans and sneakers. Blake and Ryan first met on the set of Green Lantern in 2011, and in a recent interview Ryan joked that he made the first move. "I met Blake on the darkest crease in the anus of the universe called Green Lantern," he said during an appearance on the SmartLess podcast. "We were friends and buddies and about a year and a half later we went on a double date but we were dating separate people."

The pair kept in touch with each other before they got together, according to Reynolds. "Next thing you know, she was going to Boston, I was going to Boston and I said, 'Well, I'll ride with you.' We got on the train and we rode together," he said, adding: "I was just begging her to sleep with me." A week later, he mentioned buying a house together — and they did.

And the rest, as they say, is history.