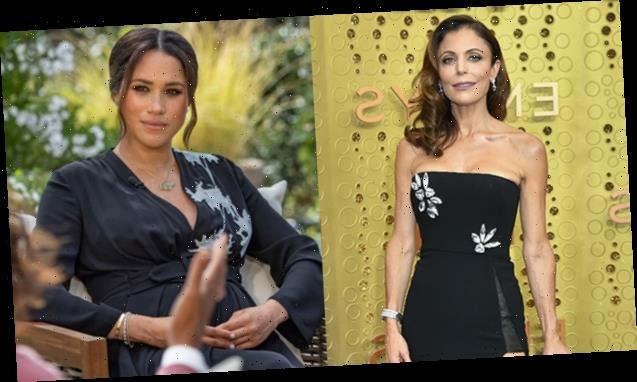 After watching Meghan Markle and Prince Harry’s tell-all interview on March 7, Bethenny Frankel back-tracked on previous comments she made about Meghan, specifically. Read her public apology.

Bethenny Frankel changed her tune about Meghan Markle and Prince Harry after watching the couple’s tell-all interview with Oprah Winfrey on Sunday night. During the emotional sit-down — which took place in Montecito, CA, where Meghan and Harry are neighbors with the host — the expectant parents unveiled bombshell details about their life inside the palace walls. In the hours before the interview aired, Bethenny tweeted, “Cry me a river,” in response to a fan tweet that included headlines about Meghan and Harry’s estranged relationship with the royal family. After facing major backlash for her “insensitive” comments, Bethenny tweeted an apology following the broadcast.

“I watched M & H sit down. Emotional distress & racism must feel suffocating & powerless,” Bethenny wrote, explaining, “I’m a polarizing, unfiltered (often to a fault) flawed person w a voice. When I heard of the interview, during a pandemic, it felt like a surprising choice. I’m sorry if it hurt or offended you,” she concluded.

Just hours earlier, the former Real Housewives of New York City star was whistling a much different tune. When one fan tweeted that the royal staff hadn’t been “respectful” of Meghan, Bethenny replied with: “Cry me a river…the plight of being a game show host, fairly unknown actress, to suffering in a palace, [with] tiaras & 7 figure weddings for TWO WHOLE YEARS to being a household name [with] @Oprah on speed dial, fetching 7 [million] for interviews, hundreds of millions in media deals,” she tweeted, adding a thinking face emoji and the hashtag “Marry” for their names. HollywoodLife reached out to representatives for Harry and Meghan for comment at the time.

In a separate tweet, Bethenny continued: “If you hate me for saying it here don’t listen to my podcast #justbwithbethenny it’s littered with my opinion…I chose reality tv, to work towards making $, to be scrutinized & criticized.I took the trappings & the beatings along with it. It’s a rose [with] petals & thorns. People beg to enter the often toxic institution I signed up for. That WAS the life I chose. You can’t play stupid & smart.”

The Duke and Duchess of Sussex‘s interview marked their first time speaking out since officially stepping down from their royal duties and moving from the U.K. to Montecito, California. In wake of the drama, Meghan’s close friends, including former Suits co-stars Patrick J. Adams and Abigail Spencer, as well as friend Jessica Mulroney, have stepped up to defend the actress.