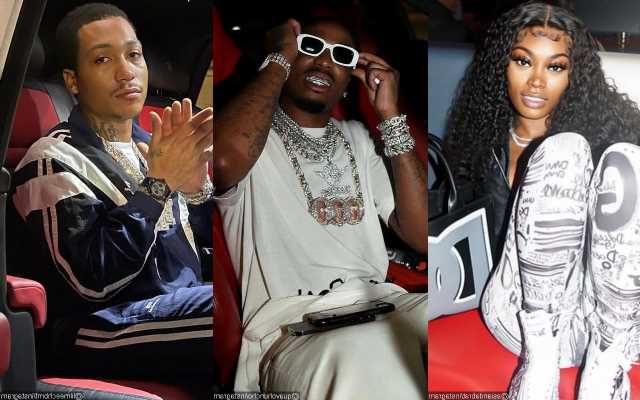 When lashing out at the 25-year-old female rapper, Jada Kingdom claims her now-ex-close-friend of cheating on the late King Von when they were together.

AceShowbiz -Asian Doll (Asian Da Brat)’s close friend has brought up some wild allegations against her following their fall out. Taking to Instagram Story, Jada Kingdom exposed the “Nunnadet S**t” raptress and claimed that she slept with some rappers like Quavo and Lil Meech.

“Quavo f**ed yu and sent yu off with NADA… Lil meech f**ed you and disappeared.” Jada declared. “Should I keep going caz idk who told yu to go there… With me? Yu better off apologizing & call it a f**kin day caz yu musta got amnesia. Don’t let me start talking who yu told me yu was f**king while with [the late King Von]. girl yu a THOT.”

“At least yu know I’m not walking unless the money talking. My product good like gold so it definitely has a price. Yu can’t name 5 n***as i ‘sold my p***y to’ and that’s why yu really mad caz I’m not a thot or a homie hopper like you,” Jada continued. “I got eleven n***a names right now dat f**ked yu silly and gave you nothing. yur p***y can’t be sold caz it’s for every & anybody!”

It remains unclear what caused the rift between the two, but Jada claimed she and Asian have stopped talking since “that last time we was in NY,” after the latter “switched like a p***sy b***h for clout.” She went on to drag the raptress by writing, “Yu talk s**t about everyone soon as they turn their bacsk! especially me caz ur friend told me everything. the same friend yu talk s**t about to me lmfao! s**ts ridiculous.”

“Yu didn’t see me as a friend. Yu wanted a sidechick & a bodyguard whole time i was too busy being genuine to realize,” she added. “I ignored everyone who tried to warn me and now look.”