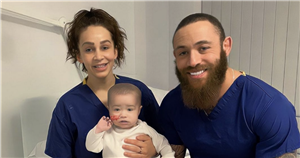 Ashley Cain has opened up on his battle with grief after the devastating loss of his baby daughter Azaylia last month.

The former Ex On The Beach star and his partner Safiyya have been coming to terms with the painful loss after their nine-month-old Azaylia lost her brave battle with leukaemia.

Ashley has now said he feels “physically and emotionally depleted” but is powering through to “continue the legacy” his daughter left behind.

Taking to social media, the TV star said he is “fighting with himself” to “not fall into a hole”.

He wrote: “When I used to use the term exhausted I don’t really think I knew the true definition until now. My mind is on a constant emotional cycle of sadness, anxiety and depression along with my heart physically aching without rest.

“I am fighting with myself every hour of everyday to stay active so I don’t fall into a hole that I or anyone around me won’t be able to pull me out of. Running, biking, swimming to try and clear my mind whilst working tirelessly to get Azaylia’s charity set up to help other poorly children suffering, while dealing with my own troubles has finally caught up with me.

"I am feeling physically and emotionally depleted and running on empty.” Ashley added: “I appreciate all the love we’re receiving and with your continued support we will be able to help lives, change lives and save lives of so many children around the world!”

It comes after the reality star, who threw a jungle-themed party to celebrate her life, visited his baby girl's grave and poured his heart out to his followers on the social media platform.

As he stood in the darkness, the 30-year-old admitted that he will have to "live haunted by the fact my daughter passed away in my arms counting her last breaths".

Speaking to the camera and attempting to hold back his tears, Ashley said: "When everything in my life felt bad I used to see her face.

"It made everything better. Now I can never do that again.

The television personality added that he will have to live with that for the rest of his life and will continue to visit her grave to speak to her for hours on end.

Ashley expressed his sadness over the fact that Azaylia spent the eight months of her life in and out of the hospital and in pain.

"Even though she didn't show, I know she was going through pain," he expressed.

"I've got to live haunted by the fact that my daughter passed away in my arms counting her last breaths. I feel for that little girl so much."

Alongside an image of Azaylia's resting place, the devoted father wrote: "Goodnight God bless to my daughter, my hero and the strongest, most beautiful person I know.”