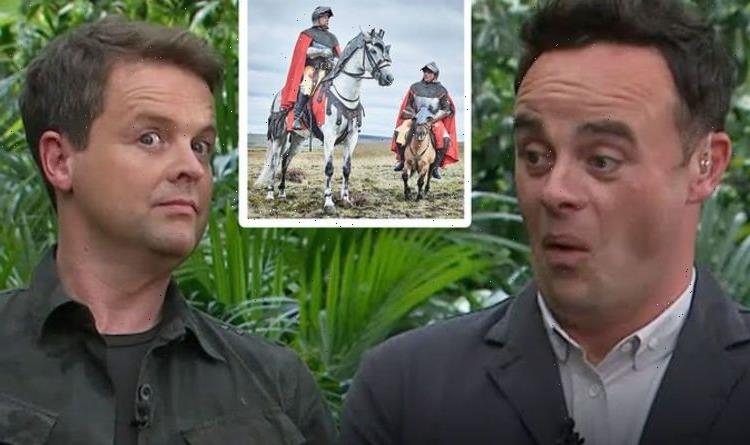 I'm a Celeb: Ant shows off behind the scenes for advert filming

Ant McPartlin, 45, and Dec Donnelly, 46, have come under fire from animal rights charity PETA, for their latest I’m A Celebrity advert. The official trailer for this year’s series was released on Friday last week, which sees the boys dressed as knights and gallantly riding horses across the Welsh plains.

While the advert was in keeping with the TV duo’s silly sense humour, PETA and some others took issue with the fact that Ant appeared to be riding a small Shetland pony that they believed was far “too small” for him.

It comes after the shared a behind-the-scenes video on their joint Instagram account that sees them on-set of the trailer where Ant’s little horse is messing around.

Joking that he was “doing a little dance”, the footage then changed to a montage to Get Down Tonight by KC & The Sunshine Band.

Dec was also seen in the clip dressed as a knight, but he was seated on a much bigger white horse as it shuffled about with him on its back.

At the end of the humorous 40-second clip, Ant was seen feeding his four-legged pal a treat, saying: “This is what you get for being a good boy,” as the pony eagerly took it off him.

But what was meant to be a harmless laugh was a more serious matter for some, as PETA reacted to the footage by releasing a statement, branding I’m A Celebrity “desperate for cheap laughs”.

PETA’s Director Elisa Allen told MailOnline: “Is there anything I’m A Celebrity wouldn’t do in a desperate attempt to get cheap laughs at the expense of animals’ welfare?

“This stunt caused a Shetland pony to struggle and risk acute back pain and even lameness.”

She added: “PETA urges the show’s producers to find more creative and humane ways of introducing its absurd antics and to leave animals in peace.”

Some viewers agreed, as they also shared their “disappointment” over the use of the small pony in the advert.

Lisagoodier168 wrote: “I love you guys and think you are both brilliant but this is not funny at all. The strain you will be putting on that small pony’s back is huge. Disappointed in you guys.”

Janemhdg wondered: “Is it ok to have a grown man sat on a small horse, poor horse.”

Eastyvonne49 added: “I’m shocked this was allowed! Ant is much too big for that small pony! So disappointed.”

Others however saw the funny side of the tongue-in-cheek clip, with one chuckling: “The pony got them moves in the big market.”

While another giggled: “Hilarious that horse is far too small.”

Ant and Dec are yet to address the comments, but Express.co.uk contacted ITV for comment.

I’m A Celebrity returns later this year to ITV.