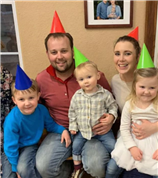 With a little luck and a lot of justice being done, Josh Duggar will be convicted and sentenced in a few months.

Until then, of course, he remains under home confinement and is free to spend time with his inexplicably supportive wife, Anna.

Anna has been busy doing exactly two things: leaving her kids with her in-laws to visit Josh, and feuding with those same relatives.

Now, it looks like the feud is trickling down to her kids — who are being left out of Duggar activities.

Earlier this month, the Duggar Family shared on Instagram that they were visiting Farmland Adventures.

At that time, it was clear that some of Anna and Josh’s children were there with their cousins.

Jim Bob, Michelle, and a number of the younger members of the Duggar brood were present and accounted for.

But for some reason, none of Josh’s children appeared to be part of the trip.

It is possible that they were with their mother, Anna, during one of her breaks from attending to Josh as he awaits trial.

After all, perhaps she didn’t want her children traveling out of state while their father cannot accompany them.

At the same time, fans are speculating that Anna and Josh’s children might have been with another relative.

One name that came to mind was Jana, Josh’s overly put upon sister who has endured the onerous chore of raising numerous children who are not hers.

No one would put it past Anna, Jim Bob, or Michelle to saddle Jana with six of her niblings to watch for a while.

Anna was once a fairly frequent user of social media.

These days, she has gone dark — and she’s not alone.

In the wake of Josh’s arrest, numerous members of his family have posted less or not at all.

With Anna being so extremely offline these days, the world has had to rely largely upon reports from those close to the family.

Some of these reports have been very consistent, matching up to paint a very clear picture of where things seem to stand after Josh’s arrest.

None of it looks good for Anna.

First of all, Anna very clearly seems to believe that Josh is innocent.

While it’s possible that her views have evolved over the past half year, early reports were grim.

Not only did she believe that Josh was innocent, but that he was some how set up, being persecuted, or even being framed.

Conspiracy theories — at one point, allegedly blaming President Joe Biden — are not a sign that someone is coping well with reality.

Instead, Anna seems fixated on being an aggressively devoted wife (if possible, even more so than before).

This is the purpose for which the cult into which she was born trained her, but it is sickening to watch.

Anna has also reportedly blamed Jim Bob on some level for Josh’s arrest.

While it’s certainly the case that the Duggar family, church, and IBLP cult contributed to an ideal stalking ground for a predator, that didn’t cause his arrest.

Anna’s volatile emotional reaction to Josh’s arrest has led her to clash and be unwelcome at the Duggar house.

We don’t know if her children are truly being iced out like their mother, but it’s possible.

It’s also possible that, as we suggested earlier, Anna simply didn’t want them traveling out of state.

That said, it’s a shame that she seemingly cannot advocate for her children in the way that she does for her repulsive husband.