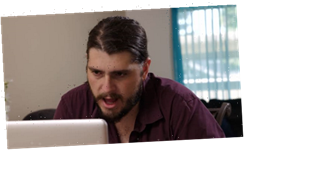 Andrew Kenton was one of two stars to demand his ring back on 90 Day Fiance this week.

But it was Andrew’s text messages to Amira that drew the ire of viewers more than anything.

The text messages that were shown on the screen weren’t just shocking.

The cruel messages that fans saw were emotionally abusive and manipulative.

Very early in Season 8, before anyone traveled anywhere, it was clear what Andrew’s portrayal would be.

Because of his nerdy, mildly alternative vibe, it looked like 90 Day Fiance‘s editors wanted him to seem weird or immature.

We all know that production looks for any angle or simple characterization that will get a reaction from fans.

Andrew is undoubtedly a good-looking guy with unusually good hair for the men on this franchise.

But it was strongly suggested by the show that viewers should be asking what a woman like Amira Lollysa could see in him.

That’s not really a fair question, but it also set up the idea that perhaps Amira was after something else.

Now, Andrew has clapped back over how the show portrays him and fans perceive him.

He has claimed to be a frankenbiting victim — not uncommong for the franchise and thus very believable.

Andrew has also bitterly implied that Amira is the villain of their season, not him.

But on Season 8, Episode 15, fans saw things that are hard to explain away.

These are harder to explain away … because no context could possibly make them acceptable.

He wrote: “You can choose your flight, here or there.”

The context was that he apparently spent the night before her flight grilling her about kids.

Planning for the future is a smart idea. The night before a flight is not the time.

And the way that Andrew went about trying to extract a promise of children from her was not acceptable.

“You’ve been given a lot more rope to hang yourself with,” Andrew texted, “so that’s on you.”

“The children at the daycare are far better team players,” he jabbed.

Andrew added: “You make your choices.”

“You shot yourself in the foot,” Andrew accused Amira.

“If you’ve got any talking to do,” he added, “I strongly suggest you engage me now.”

“My time is limited,” Andrew warned, before beginning an outrageous 60-second countdown.

Regardless of the context of those texts, that is toxic, verbally abusive, and emotionally abusive.

(Unless Andrew prefaced them with “per your request, here are a list of texts that only a rotton, abusive partner would send” so let’s never say things like this)

Anyone speaking to anyone like that, in person or via text, should be cut out of the recipient’s life.

“What a horrible analogy to use,” wrote a social media denizen.

“He knows he’s manipulating and gaslighting her to the point she’s an emotional wreck (possibly even depressed),” the fan accused.

The comment continued: “Then he goes and says that and acts like his time is so precious and needs immediate texts back?”

“Situations like these are when the producers should step in and help the girl out,” another fan suggested.

The comment continued: “And tell her this is abusive and to not take this behavior.”

As we have all seen from Stephanie’s season, production does not seem to feel an obligation to step in.

“Talks to her like a child. A COUNTDOWN?” another outraged viewer wrote.

“I just cried and cried for her during her segment,” another expressed.

That same commenter observed: “This guy is nothing but a prick.”

While many take issue with the misuse of the word “gaslighting” to mean “complicated lying” instead of its more specific meaning, a lot of that holds up.

It may well be that Amira planned their trip, or even that she just wanted to be famous and become an influencer.

But none of that changes what fans and viewers have seen. Unless Andrew claims that the texts were totally fabricated? Didn’t think so.