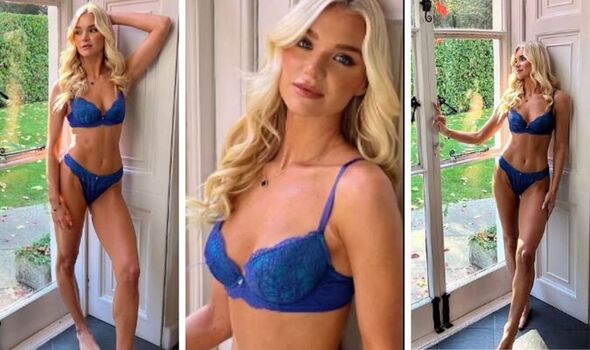 AJ Pritchard’s ex Abbie Quinnen is rising above her heartbreak

The latest set of sizzling lingerie snaps from the flawless model suggest that she’s putting her heartbreak behind her and making the most of life as a newly single lady.

AJ Pritchard’s ex Abbie Quinnen, 25, showed that she was undeterred and undefeated with a set of snaps posing in a cobalt blue lace patterned lingerie set.

The model and dancer, who showed few signs in her photos of the blows that have been dealt to her this month, is understood to have enjoyed a night out alongside fellow singleton Liam Reardon from Love Island recently.

Just days after AJ went public with new partner Zara Zoffany, she partied with Liam at an afterparty for a boxing match.

Abbie had earlier told of how she had thought her relationship with AJ was the real deal after a horrific accident left her with three degree burns on her body and face, and he’d nursed her and lovingly changed her bandages for her.

However, she has delivered a clear message that she’s moving on in her latest Ann Summers lingerie photos, captioning them with the words: “Life’s a climb, but the view’s great.”

The dancer enthused: “I think blue is my new favourite colour”, as she showed off her flawless figure in the bra and pants set.

Abbie Quinnen and AJ Pritchard had once been a loving couple

The pair were regularly declared “couple goals” by fans, and Abbie had even told Express.co.uk of her desire to star with AJ in a musical about their lives together – but her world came crashing down after he announced he’d found love with new flame Zara Zoffany.

The pair are thought to have grown close while filming Channel 5 show The Challenge in South Africa recently – and now they have announced they are a couple.

Abbie Quinnen shared photos of herself posing in an all white outfit at a London hotspot, captioning the photo: “Gorgeous, gorgeous girls know their worth”, while her mum supportively responded to the snap with the words: “You my beautiful daughter are worth more than money can buy.”

Meanwhile, AJ Pritchard has also been out on the town

Days after the split, he appeared in a dapper suit and tie at the Attitude Awards in London, soon after being spotted kissing Zara in the street.