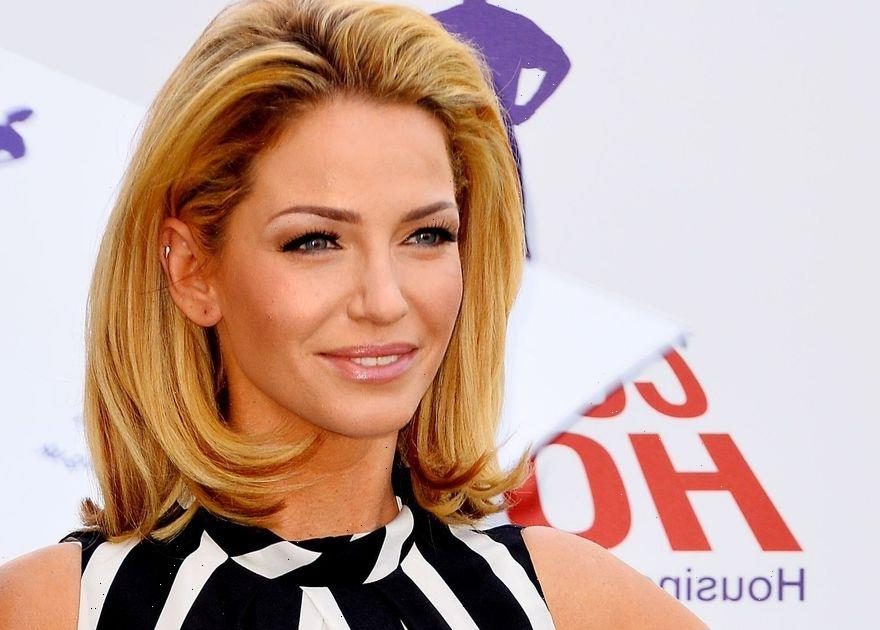 There was only one thing the nation was talking about in 2002 – Popstars: The Rivals. The show was a huge hit, with millions tuning in every weekend to see who would be picked to be in the UK’s next biggest girlband and boyband.

But never in her wildest dreams had Sarah Harding thought, on the day of her first audition for the show, that in just a few short months she would have a chart-topping single as she launched a career that would lead to superstardom.

And for Sarah, it was one of the best times of her life, with her telling OK! in 2017: “I love reminiscing and looking at old tour footage because we were in a bubble. Touring for me was probably one of my favourite parts of being in Girls Aloud.

Not the rehearsals – but getting out there, meeting the fans and performing.

“That’s why I do what I do. I didn’t do it for the fame, I did it because I genuinely love performing, singing and entertaining. It’s all I’ve wanted to do since I was a little girl.”

Here, we take a trip down memory lane and look at the formation of the band that made pop history – and is still as popular today as it was back then… With so many reality talent shows on our screens these days, it’s hard to understand how big a deal Popstars: The Rivals was. Presented by Davina McCall and coming hot on the heels of the first Popstars contest, it was watched by millions and its hopefuls made headline news.

The five girls who ended up in the final Girls Aloud line-up – Sarah, Cheryl Tweedy, Nadine Coyle, Kimberley Walsh and Nicola Roberts – beat hundreds of wannabes for a shot at the big time.

The premise for the show was that both a girlband and boyband would be formed and the winners, selected by the public, would go on to release a single. Record producer Pete Waterman mentored the boys, One True Voice, while manager Louis Walsh oversaw the girls and former Spice Girl Geri Halliwell acted as an intermediary between the rival camps.

Sarah, then 20, almost didn’t turn up for her audition but was persuaded to attend by her boyfriend at the time. Little did she know that her rendition of Last Thing On My Mind by Steps would propel her to fame and fortune.

Her fears back then were that she would be “making a fool of myself in front of millions of TV viewers”.

But standing in front of the three judges in 2002 for those few minutes at The Lowry Hotel in Manchester changed her life forever. After a few strong bars of the song, the judges nodded in agreement and Pete told her, “You’re through, you’re going to London.”

And a star was, well, almost born…

Sarah found herself beating all the elimination rounds – and her nerves – to get to the finals. But naturally, the journey wasn’t without drama. Kimberley only just made it into the band after it was discovered Hazel Kaneswaran had been 10 days over the age limit to audition – and Nicola only made it because Nicola Ward quit.

During the live final, Cheryl was announced as the first band member, followed by Nicola, Nadine and Kimberley. With only five spots available, the selection of the last member came down to a tense choice between Sarah and Javine Hylton.

Davina brought the two singers centre stage to announce who had won their place in the most hyped TV moment of the year.

“I was utterly overcome at being chosen, because, in truth, the expectation was that Javine was one of the dead certs to be picked,” she said. “To be honest, some of my tears were because I wasn’t sure all the rest of the girls were so happy with the choice. I know we all feel very different about it now, and that the girls are delighted with the way things turned out.”

Girls Aloud became one of the biggest girl groups the UK had ever seen. Before the girls could take a breath after winning the show, they were whisked off to shoot their first music video, for Sound Of The Underground. The song was released in December 2002 and flew into the charts, taking the Christmas No1 slot – staying at the top for four weeks.

In all, Girls Aloud went on to have 21 Top 10 singles in the UK and six Top 10 albums. They were nominated for five BRIT awards and in 2009 they won Best Single for The Promise.

Remembering that moment in her book, Sarah recalled, “Winning the BRIT for The Promise was one of the biggest moments of my life… I’m sure all the other girls will say the same.

"As usual, I was the first to grab the award, holding it aloft and screaming, ‘It’s about time!’”

Other hits included Biology, Call The Shots, Love Machine, Something Kind Of Ooooh, Jump (recorded for the film Love Actually) and Untouchable.

The girls were on a roll and went on to sign lucrative commercial deals with Samsung, Nintendo and KitKat, and for limited-edition false eyelashes for Eylure, Barbies for Mattel, Pandora bracelets and Sunsilk hair products (said to have netted each band member £250,000 alone). Sarah also bagged a solo contract with Ultimo.

Sarah was ecstatic at their success and it was clear early on that the band was going to be huge. The girls had a Spice Girls quality which meant every band member appealed to the fan base in a different way.

From the outset, Girls Aloud were a rare beast in the pop world, as a group of substance that oozed glamour, released catchy tunes and appealed to all ages.

The girls started out wearing Dorothy Perkins but soon graduated to designer labels, famous boyfriends and getting used to the finer things in life. And none of that was a problem, as their time in the band was reported to have netted each member upwards of £5 million.

Over six weeks, between 11 April and 16 May 2006, the public were treated to a glimpse behind the scenes of Girls Aloud in a TV show called Girls Aloud: Off The Record.

The six-part show focused on the build-up to their successful Chemistry album tour, from appearing on TV shows to filming the video for Whole Lotta History in Paris, as well as doing promotional trips to Australia, New Zealand, Ibiza and Greece, and visiting China.

It was no-holds-barred viewing which showed the girls facing all the challenges of being successful pop stars – including the gruelling travel schedule and trying to balance their home and work lives, as well as managing their personal relationships.

Rather sweetly, when the girls reunited at Soho Farmhouse in Oxfordshire to hang out with Sarah following her cancer diagnosis, they decided to watch the entire series again – you can imagine the howls of laughter!

While the girls all enjoyed going out, Sarah was always seen as the party girl of the band and earned the name “Hardcore” Harding in the tabloids. In fact, in Off The Record, she’s seen out on the tiles saying,

“I haven’t got anyone to stay in for so I might as well go out and get p***ed.” Of course, this made her a tabloid favourite and she was followed everywhere she went. She once said: “When I lived in London there was something going on every night of the week and you never wanted to miss out. I always wanted to be the life and soul.” Nicola and Kimberley expressed concern about Sarah’s behaviour and she went to rehab in the US in 2011 for depression and alcohol issues. She said: “I’ve been told by those close to me that was when I hit my worst. I was crying hysterically. I felt ashamed, embarrassed, terrified – my emotions were all over the place.”

Fortunately, she was able to successfully close that chapter in her life, retreating to her country home to spend time with her beloved animals.

Along with all their promotional work, the girls staged six very successful tours. The first in 2005 was What Will The Neighbours Say? and took in 23 shows over 20 venues.

This was followed in 2006 by the Chemistry tour, which saw them strutting on a catwalk.

The Greatest Hits Tour was a short tour in May and June of 2007, where they performed all their hits up to that point.

Then in 2008 came the Tangled Up tour, which was bigger and longer than the others, costing around £3 million to stage.

Their costumes were designed by Julien Macdonald and for their opening number the girls arrived suspended in the air, wearing black capes.

The Out Of Control tour in 2009 was their fifth and had to be extended due to their popularity, and their final outing as a five-piece was Ten: The Hits tour, which took in 20 dates celebrating 10 years at the top of the charts.

After the band played their last tour date on 20 March 2013, at the Echo Arena in Liverpool, they didn’t reunite until Sarah’s cancer diagnosis brought them back together.

Cheryl said of that reunion: “When we all got together at Soho Farmhouse, there were no tears. Actually, that’s not entirely true – there were tears but they were from laughter rather than sadness. It was a lovely trip away for us all, and Sarah was at her best.”

As happens often with bands, the girls wanted to pursue different projects but they split on an absolute record-busting high – with 21 Top 10 singles and four No1s to be proud of.

In 2012, Girls Aloud were also named the UK’s biggest-selling girl group of the 21st century, with over 4.3 million singles sales up to that point.

For all of the latest showbiz news, sign up to our daily newsletter here