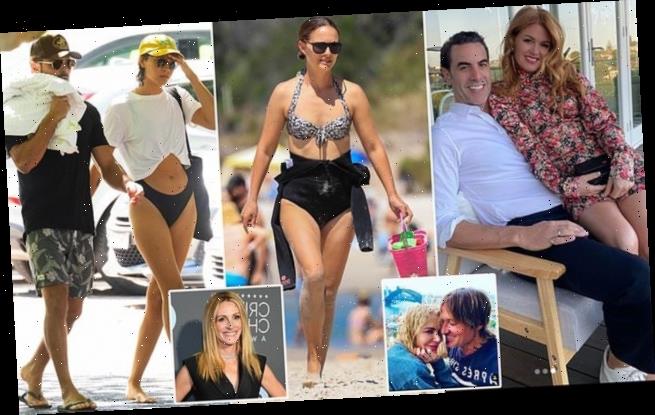 Goodbye Hollywood… it’s g’day Aussiewood! A-list stars from flee LA for Down Under where movies are booming as they swap boutiques for barbies on the beach

No wonder Australia has taken over from Hollywood as the new epicentre of the entertainment industry.

For months, tinseltown A-listers have been quietly arriving and completing their 14-day hotel quarantines, while looking forward to the almost unfettered freedoms to be enjoyed.

Film production is under way everywhere from the sprawling city of Perth in the south-west to the remote glory of the Whitsunday Islands in the north-east.

So many films and television shows are currently being shot in Sydney that there have been grumbles about all the roads which have been closed to accommodate them.

The government notes that some 13,000 locals have got jobs in filmed entertainment since Christmas. 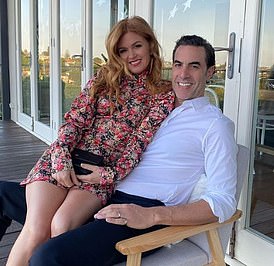 They are now living in Sydney and are said to have already enrolled the kids at a local school.

Baron Cohen, 49, has been seen enjoying Sydney beaches with his family and having picnics in the city.

He recently remarked that he had put himself in physical danger for a final time when making the Borat sequel in the U.S. and had to wear a bullet-proof vest while undercover in some scenes.

A very private individual, it’s understood that he deplores the American political climate, despite the end of the Trump presidency, and wants to raise his family elsewhere.

Filmmakers have been attracted by a £300 million fund which has been made available to kick-start a post-Covid movie boom.

Meanwhile, the Hollywood stars of those films have been attracted by the prospect of spending a few months enjoying freedom and sunshine.

As Screen Queensland’s CEO Kylie Munnich observed: ‘We are very lucky to have a Covid-safe destination where people can film right now and luckily not be subjected to delays or shutdowns and as well they can have an amazing lifestyle while they’re here.’

Oscar-winning film director Ron Howard, who is in Australia to make a film about the Thai cave rescue, said: ‘It’s one of the few places I feel OK about not having my mask on right now. It’s literally a breath of fresh air.’

And some celebrities may be there to stay. Borat star Sacha Baron Cohen, who has lived in Los Angeles for more than a decade, is said to have relocated to Australia permanently, as has actor Zac Efron, who has fallen in love with an Australian waitress.

And it seems that Nicole Kidman, who was living with country music star Keith Urban in Nashville, is planning to stay out on a long- term basis, too.

Restaurants are only open outdoors, large live events are banned, and shops are open to distanced mask-wearers.

By contrast, in the entirety of Australia, there have been 29,000 confirmed Covid cases and 909 deaths since the pandemic began. Infections are running at around 11 a day.

Small wonder that Chapel Street in Melbourne is finding more favour than Rodeo Drive, and Manly Beach in Sydney is the new Malibu.

So who has arrived in Aussiewood so far? Where are they staying, and what freedoms are they enjoying?

ALISON BOSHOFF has the story of the great Pacific pandemic-free paradise . . .

Zac Efron, the star of High School Musical and Baywatch, arrived in Adelaide a year ago to make the film Gold about two drifters in the Outback who find a huge piece of the precious metal.

He has opted to settle permanently in the country. Over the past year he has caused a huge stir in uber-chic Byron Bay, where he is often seen in bars and restaurants.

In July 2020, he met waitress Vanessa Valladares when she was working at the General Store cafe and the pair have been an item ever since. 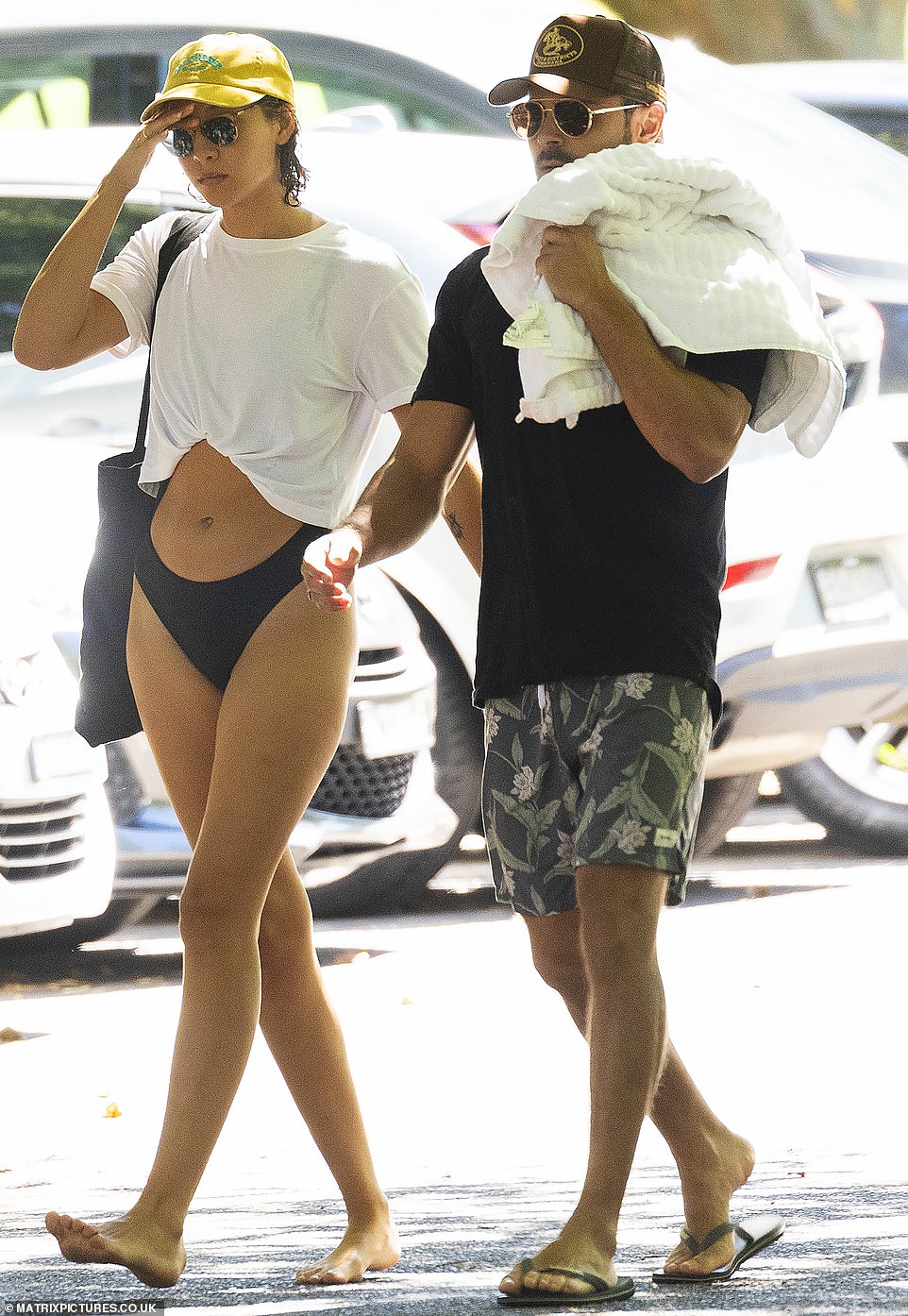 He didn’t return to LA even though filming ended in August, and got a 12-month visa extension.

Zac, 33, is now said to have spent £1 million on a piece of land in the Tweed Valley, where he will build his dream home among the mountains and rainforest.

It’s about an hour away from the rented house in Byron Bay where he and Valladares were living.

In December, he put his LA home on the market. ‘He’s settled down,’ a source said. The couple are now said to be spending time in the eastern suburbs of Sydney.

Kylie’s in her own back yard

Kylie Minogue arrived back in home town Melbourne in January from London, where she has lived for 30 years, and quietly completed her quarantine in a hotel.

She is now living in the city, where her parents and sister Dannii are also based, and recently posted a picture of herself playing a very glamorous game of ‘backyard cricket.’

She and Dannii have been seen at the Louis Vuitton store.

While living in London, the singer and actress, 52, would make regular visits to Australia.

The pandemic changed that. She said last year: ‘I have never felt further from home or from my family.’

It’s thought she will base herself in Melbourne until the summer. In January, she made a surprise visit to the Sounds Better Together Music festival.

She Instagrammed a picture of herself enjoying a takeaway pizza straight from the box.

Actress Natalie Portman has been in Australia for the past six months with her family — and has apparently been socialising with Sacha Baron Cohen and actress wife Isla Fisher. 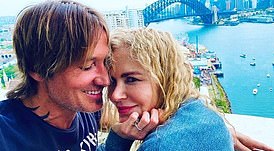 Until last year Nicole Kidman, 53, and her family were chiefly based at the Nashville house owned by her musician husband Keith Urban.

However, recently she has been dividing her time between her penthouse apartment overlooking the harbour bridge in Sydney, her 111-acre farm in Bunya Hill, the Southern Highlands, and a film set in Byron Bay.

This year she made a TV adaptation of Liane Moriarty’s novel Nine Perfect Strangers which also stars Melissa McCarthy and Luke Evans and will come out next year.

Urban, also 53, is a judge on Australia’s The Voice and has also been filming in Sydney.

The Black Swan star is living in a rented house in fashionable Vaucluse with her family while shooting the forthcoming film Thor: Love And Thunder alongside Idris Elba, Chris Hemsworth, Matt Damon and Chris Pratt.

Locals have seen her cheering on son Aleph, nine, on the football pitch and taking her daughter Amalia, four, to the beach.

She’s also been spotted picking up groceries at Woolies in Double Bay.

Natalie, 39, told an interviewer that the family had been in Australia for so long that the children had started picking up Australian words.

During filming Hemsworth, 37, who plays Thor, has been staying in a rented mansion in Sydney suburb Woollahra with his wife and children.

It’s the same property which was rented by Sir Elton John during his last tour of Australia.

Hemsworth also has a huge house in Byron Bay.

The shoot is thought to have wrapped a week ago.

She is thought to be staying at the Pacific complex in Byron Bay, nine hours drive from Sydney.

While in Australia the Pretty Woman star will also make a rom-com with George Clooney — so she’s in for a long haul.

The film, Ticket To Paradise, will be directed by Thandie Newton’s husband Ol Parker and will get a £2.5 million grant from the government’s Location Incentive Program.

Roberts, 53, and Clooney, 59, play a divorced couple who rush to Bali to stop their adult daughter from getting married. It will film in the Whitsunday Islands, which will double for Bali, but will also shoot on Australia’s Gold Coast and Brisbane.

Actor Mark Wahlberg made a trip to Australia in December last year to film an advert and launch some new outposts of his burger chain.

He announced that he has signed a deal to bring Wahlburgers to 15 locations in cinemas across the country.

He will return for an extended period later this year to make a film. Wahlberg, 49, said: ‘I’m looking forward to coming back.

‘Hopefully, I’ll be able to move my family down to Australia for four to five months and make a movie on the Gold Coast and enjoy that beautiful country.’

Natalie Portman’s husband Benjamin Millepied is directing a film version of the opera Carmen in the small rural town of Breadalbane, New South Wales. It was originally meant to be shot in LA.

Paul Mescal, star of BBC TV hit Normal People, is the lead and he’s been living in Sydney temporarily.

He celebrated his 25th birthday in the Rose Hotel in Chippendale, Sydney and was spotted on Maroubra Beach while filming in January.

Matt Damon has been shuttling between Sydney and Byron Bay for the past month while filming Thor: Love And Thunder.

Earlier this month the 50-year-old Good Will Hunting star was spotted with wife Luciana and their daughters Isabella, Gia and Stella at Sydney’s Taronga Zoo.

Matt and his family are said to have been renting a house in Byron Bay, but he also has a suite in the five-star Crown Towers hotel in Sydney. 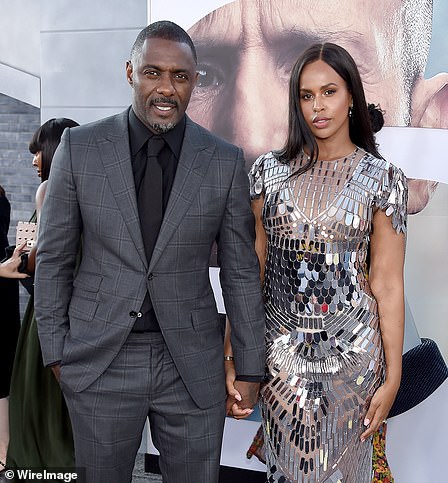 They rode horses and enjoyed an archery lesson in the Blue Mountains.

He arrived in Australia in September last year and has been in Sydney ever since.

Idris, 48, DJ’d at the Goodbar nightclub in Sydney and has been seen running errands locally and working out in the gym. He’s thought to be renting a house for the duration in Hunters Hill.

As well as a role in the next Thor film, he is making an epic fantasy romance drama, Three Thousand Years Of Longing, opposite actress Tilda Swinton.

He was recently seen attending the Mardi Gras Festival at the Sydney Cricket Ground.

It’s thought that up to 23,000 spectators were allowed in the stands while performers were on the pitch.