As if you needed another reason to watch the fifth season of Selling Sunset (which dropped today!!!), there’s the budding relationship between costars Chrishell Stause and Jason Oppenheim (who, sadly, broke up in December 2021) to watch blossom IRL because, honestly, we may or may not be reeling from their split.

If Chrishell and Jason’s ~love~ is news to you (or if you know alllll about it and just want an excuse to relive the details), keep scrolling for a timeline of their romance.

Chrishell joined the Oppenheim Group in 2018, a while after getting her real estate license.

Selling Sunset season 1 premiered on Netflix in spring 2019 and viewers learned that Jason had some history with Mary Fitzgerald from the show.

“I don’t give her special treatment,” he told Good Housekeeping about working with his ex. “I understand that there can be frustrations from other agents because they see that Mary is being involved in and brought on to many of my listings. While I don’t share the financials with everyone because that’s confidential, I think that everyone would admit based on just the obvious work that she’s done that she’s bringing more money into this brokerage and selling more properties than anyone else.”

Chrishell’s now-ex-husband, This Is Us actor Justin Hartley, filed for divorce. Chrishell opened up about the split on Selling Sunset (naturally) and revealed that she was very much blindsided by the news.

“Because of the crazy way in which this went down, people want answers, and I f*cking want answers,” Chrishell explained on the show. “I know people are saying we were only married two years, but it’s like, we were together for six years.…In a fight, that’s his go-to, you know? Like, ‘I’m out, I’m out.’ I hate that kind of impulsive stuff, but I always just thought, you know, that’s just an issue that we work through it.”

In May of this year (just a couple of months before news of his relationship with Chrishell broke), Jason told Page Six that he thought dating costars “probably wouldn’t be an epic idea.”

“It’s not that I’ve taken a step back from dating—it’s not on my priority list, to be honest,” he explained. “And no, that wouldn’t be a priority for me. I think that would be complicated.”

In July, fans were taken by surprise when Chrishell and Jason went Instagram official during a cast trip to Italy. Chrishell snuck PDA pics of them into a gallery post of other shots from the trip and captioned the post, “The J.Lo effect.”

The same day, Jason confirmed the news to Us Weekly, saying, “Chrishell and I became close friends and it has developed into an amazing relationship. I care about her deeply and we’re very happy together.” 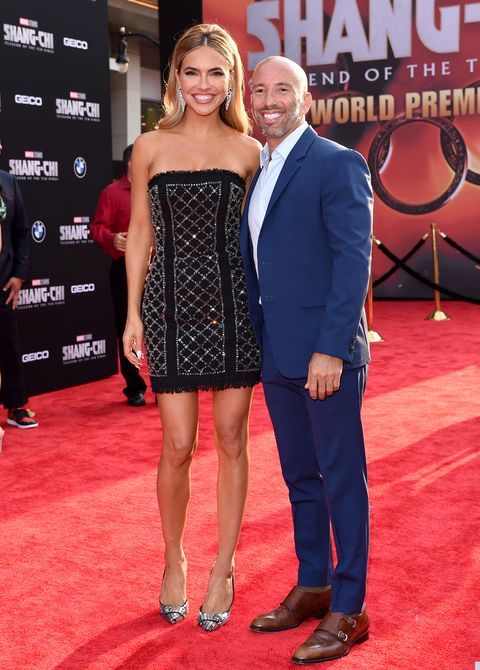 In August, Chrishell and Jason made their red carpet debut as a couple at the premiere of Shang-Chi and the Legend of the Ten Rings in Los Angeles.

About a month after they went IG official, Chrishell revealed that she and Jason had been dating for a couple of months before they decided to share the news with the world.

“It’s just one of those things. You don’t want to share with everybody and get all their opinions before you really know what it is,” she told E! News. “We really were really private and secretive for as long as we could until we realized the walls were closing in. People were getting a little savvy to it.”

Chrishell and Jason got all kinds of dolled up for a night out with the rest of the Selling Sunset cast—and celebrated the occasion by sharing some more sweet PDA on IG.

Chrishell and Jason officially became paparazzi magnets, and snaps of them enjoying some lunchtime PDA made the rounds on gossip sites (Just Jared has *all* the pics, if you need to take a look).

After seven months of serious dating, the Selling Sunset stars take to Instagram to confirm that they are no longer together.

“Jason was and is my best friend, and other than our ideas for family ultimately not being aligned, the amount of respect and love we have for each other will not change going forward,” Chrishell wrote in a since-deleted Instagram post. “…And thank you Jason for the most incredible relationship and for consistently being honest with me even when it hurts,” it read.

Jason also turns to the platform to talk about the split:

In an interview with Mirror, Jason admits that their breakup was hard on him and things are “really tough” right now. He says that he’s not looking forward to seeing season 5 play out, as it was a time when he felt a lot of “sadness, pain and loss.” The real estate broker also tells US Weekly, “I think that I made the right decision for myself, but also I think it’s just extremely difficult…I love her still. I always will. She’s a great woman so there’s just a lot of loss there.”

Season 5 of Selling Sunset drops, and our hearts melt yet again when we relive the costars’ relationship 🥺. The first episode begins with Jason and Chrishell on a couples’ vacation to Greece with Mary, Romain, Brett, and his girlfriend Tina (TBH they look so in love it makes us want to book a bae-cation stat). Many of the first few episodes center around the ‘ship, and *the* cutest segments reveals that Chrishell and Jason have even talked about and picked out baby names. “I know I want to be a mom. We even came up with a name for our fictitious child. Her name is Maverick,” Chrishell says to Jason’s mother. *takes deep breath* *cries*

Aaand that brings us to right now! We won’t spoil much else for you, but, be warned, you will def wanna break out the Kleenex for this season.

PSA: This list will be updated with the next installment of Chrishell and Jason’s…relationship? friendship? workship? You get it.