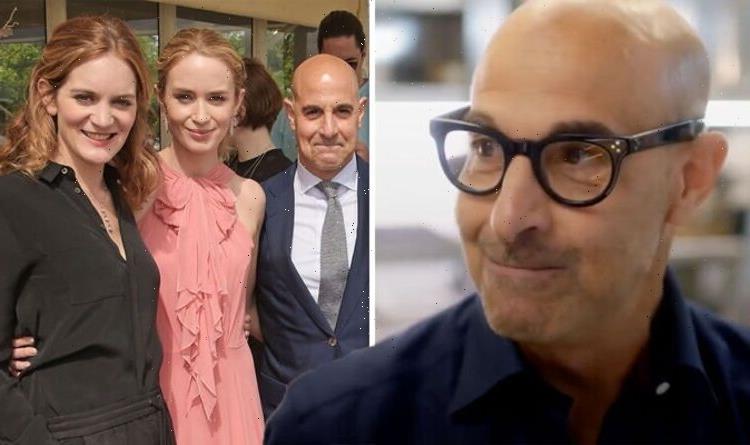 Emily Blunt, 39, has spilled the beans on her brother-in-law Stanley Tucci, revealing he is a totally different man once he’s had an espresso in the morning. Stanley, 61, is married to Emily’s sister, Felicity Blunt.

Stanley, whose documentary Searching for Italy airs on Sunday, was described as a “beautiful painter” and “great drummer” by A Quiet Place star Emily, who is married to John Krasinski, 42.

She also revealed he is “weirdly flexible” with a “leg lift that rivals Jane Fonda’s”.

“Never seen him in his socks in my life,” Emily said.

“I love that Stan starts each day walking into the kitchen … going ‘Ah, Chrisssst,’ probably from a sleepless night of small children being up or from a night where martinis flowed.

“But once he has his espresso, he’s a changed man,” she added to PEOPLE.

He and Kathryn share three children together: daughter Camilla and twins Nicolo and Isabel.

“My wife was an extraordinary person who showed us all what great strength is,” Stanley told the New York Post after her death.

He met Emily when they both starred in The Devil Wears Prada in 2006, opposite Meryl Streep and Anne Hathaway.

It was there he met the bride’s sister, and they hit it off in a big way.

Two years later, Stanley and literary agent Felicity married in a civil ceremony in London, where they now reside.

A source told Us Magazine: “Stanley is very happy with [Felicity].

“Emily loved Stanley on the set of Devil, and just thought they would hit it off, so she set them up.

“It hasn’t been easy for him getting into a new relationship, but Felicity is a lovely person and very warm and comforting.”

They welcomed a son named Matteo Oliver in 2015, and a daughter, Emilia Giovanna, in 2018.

Stanley’s travel cooking show is back on our screens on Sunday, as foodie Stanley explores the most beautiful areas of Italy and the delicious cuisine they provide.

But fans of the show will be disappointed to know the conflict in Ukraine has delayed the creation of the second series.

“Due to the situation in Ukraine, season two of Stanley Tucci: Searching For Italy will be delayed and will premiere later this spring,” read a statement on the actor’s Instagram last month.