I firmly believe in the magic of movement. After sweating, I feel sharper, stronger, and calmer. So I am passionately pro-activity: whenever you can, and in whatever way makes you happy.

Lately that’s meant winning my workouts at home, since the fitness landscape has changed so dramatically since lockdown restrictions went into effect to thwart the devastating spread of the COVID-19.

In mid-March, gyms halted membership dues, studios stopped a la carte classes, and independent trainers and laid-off instructors pivoted to virtual channels to engage clients like their livelihoods depended on it. (Because they did.)

Big fitness brands capitalized on the stay-at-home orders. Peloton began selling its new souped up Bike+ on September 9, while cutting the cost of the original bike by $350. (Bike+ development began long before the lockdown.) Lululemon, the Vancouver-based activewear company, put their own stake in the virtual workout world by acquiring The Mirror for $500 million in July. Enter Apple Fitness+: a mix of both software and hardware.

This mammoth undertaking pre-dates the pandemic. But its launch timing—in the midst of a new stay-at-home peak when many gyms and studios have closed again—is fortuitous.

Because of my role at Women’s Health, companies and fitness pros reach out offering gratis sampling of their content and equipment. (I know!) It’s all in the hopes that I will love it and share it, inspiring others to become paying customers. Road-testing these products has given me a unique perspective onthe innovations in at-home fitness.

Thanks to the folks at Apple, I’ve been secretly sweating with AF+ for the past week. It includes beginner-friendly workouts on (non-Apple) equipment like an indoor bike, treadmill, and rowing machine—as well as prop-free modalities (such as dance, core, yoga, HIIT, cooldowns).

Here are the nuts and bolts on experience, and my thoughts about how it fits into our new digital fitness universe.

How much does it cost?

Apple Fitness+ costs $10 a month; or $29.95 as part of the Apple Premier One subscription that includes services like Apple Music, Apple TV+, Apple Arcade, and AppleNews+. AF+ is viewable (er, sweatable) on an iPhone, iPad, and Apple TV. Up to six family members can share a subscription. Starting today, the purchase of an Apple Watch will get you three free months of AF+, and existing Watch owners automatically get one month free.

Do you need an Apple Watch for Apple Fitness+?

Yes. You need to own an AppleWatch Series 3 or later, running WatchOS 7.2. Also necessary: an iPhone 6s or later or iPhone SE, with the iOS 14.3 update that was released today.

What you don’t need: an iPad or an Apple TV, but note that the AF+ experience also comes to life on those devices, if you have them.

Apple integrates health stats (your heart rate, calorie burn, activity rings) it’s calculating in that tiny computer on your wrist onto the bigger screen, resulting in a very slick user experience. (However, assuming you’re all set up, you can play workouts on your devices without the Watch on your wrist. But I’m not sure why you’d do that, unless its charging?) 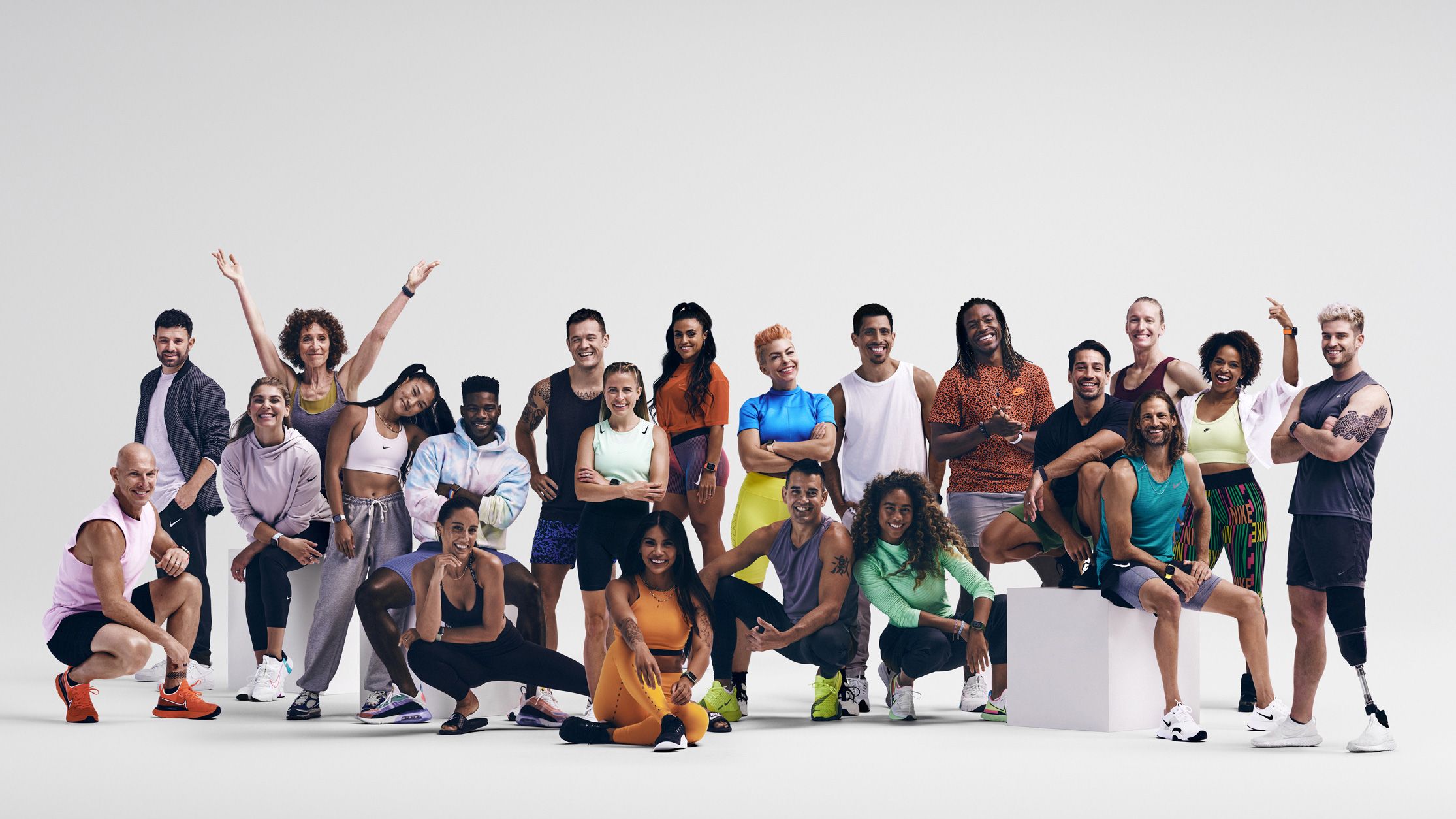 Who are the trainers?

There are 21 trainers on the platform, who cover a variety of fitness modalities from running and rowing to core work and yoga. Beginners are especially welcome here. (In fact, Women’s Health awarded AF+ a 2020 Fitness Award because of its focus on making women feel like we all have the ability and tools to get in a great sweat, no matter our ability level.)

Props to Apple for casting diverse, charismatic, talented instructors. And shoutout to Women’s Health Advisory Board member Betina Gozo, who is prominently featured throughout the platform.

It appears that Apple’s search focused on leveraging the talent of another powerhouse brand: Nike. All of the gear (sneakers, sports bras, leggings, all of it) isswoosh-ed up, and many trainers are already on the Nike roster. Makes sense considering Nike was an early collaborator and debuted a co-branded, bespoke version of the Apple Watch.

The experience is beautifully inclusive, from the ages and ethnicities and body types represented in the crew of instructors (trainer Molly Fox, who’s in her 60s, crushes it), to the “you’ve-got-this!” cuing they all organically and seamlessly inject into every workout. A subtle but powerful touch: Each trainer includes a go-to American Sign Language intro and outro no matter how short or long the session.

AF+ includes an “Absolute Beginner” library with introductory classes hosted by one instructor who is laser-focused on demystifying a modality for newbies. For indoor cycling and rowing, there are “Getting Started” videos that show you how to set up equipment and lock into proper form.

With the exception of Mindful Cooldown and Absolute Beginner videos, all workouts contain at least two trainers: the main instructor, plus another who modifies the moves in a less-advanced way. Many feature a third who is going all-out, giving experienced athletes someone to chase from afar. Trainers often make cameos in one another videos, which is a cool touch that makes them feel like a united team.

The production value is high. All workouts are filmed at an Apple studio in Los Angeles, with sweet lighting and angles that change up for different modalities. Backdrops include a wood-paneled set (which reminds me a lot of the zen vibes at their Cupertino campus) and a cool-and-gritty exposed brick wall, plus others.

How is Apple Fitness+ different from Peloton?

As a Peloton Bike+ geek and The Mirror super-user—yup, again with the lucky me!—I miss the live class option. “Appointment” viewing makes you feel extra accountable, and it is crazy fun when an instructor calls you out mid-workout.

However, the absence of live programming won’t be a dealbreaker for most users. At Women’s Health, where we’ve been streaming up to two IG Live workouts a day since March 17, most episodes rack up views in the hours, days, and weeks after they’ve been posted. My non-scientific analysis of Peloton and Mirror workouts suggests the same: The vast majority of users take the classes after they’ve aired live.

Two people can’t sweat in sync together on AF+.

Apple Fitness+ is really designed for one user at a time. Your partner or child can sweat next to you—and record it as an activity on his or her own Apple Watch—but their stats won’t be displayed on your screen. The fact that you can beam the workout onto a large screen via Apple TV makes it possible to recruit family members to work out with you. (My son Charlie and I had fun dancing with Ben, then chilling with a Mindful Cooldown that included a short meditation with Jessica.)

Which means that the community vibes are there, but not super strong.

When you finish a workout, you can zap it to a friend to inspire them to try it, too. (Or to humblebrag!) But there is no mechanism for interacting with your instructor or fellow sweat-ers in real time. That’s one of my favorite parts about the Bike+…throughout each ride, it nudges me to virtually high-five other riders who are eclipsing major milestones, and vice versa. However, if you’ve opted into sharing your activity, your friends will be alerted when you log an AF+ workout. And for gold star lovers (hi! me too!), there are badges aplenty. There is the option to to have your “Burn Bar” visible throughout your sweat when you’re doing a HIIT, treadmill, cycling or rowing workout, allowing you to see where your effort stacks up in the pack of folks who’ve already completed the session. The more intense your rolling 2-minute effort, the higher you fall in the pack. Your final position is your average effort across the entire workout.

It’s a softer version of the competition-stoking metrics available on other platforms and IRL fitness studios.

There are no hybrid workouts…so far.

Bootcamp-style sessions that mix modalities have taken off in the past few years. (Think the Barry’s Bootcamp tread-and-strength format, or Orange Theory’s rowing-and-lifting model.) Peloton entered this space with its Tread, and now offers it on their bike, as well. TBD if AF+ will eventually jump in here.

Apple may not have to since AF+ assumes that users are mixing-and-matching the 10-, 20- and 30-minute workouts, creating their own DIY experience. Similarly, unlike many workout apps, AF+ forgoes cool-downs, instead relying on users to tap into (literally) a 5- or 10-minute “Mindful Cooldown” when they’re ready. There’s an entire library of these options. 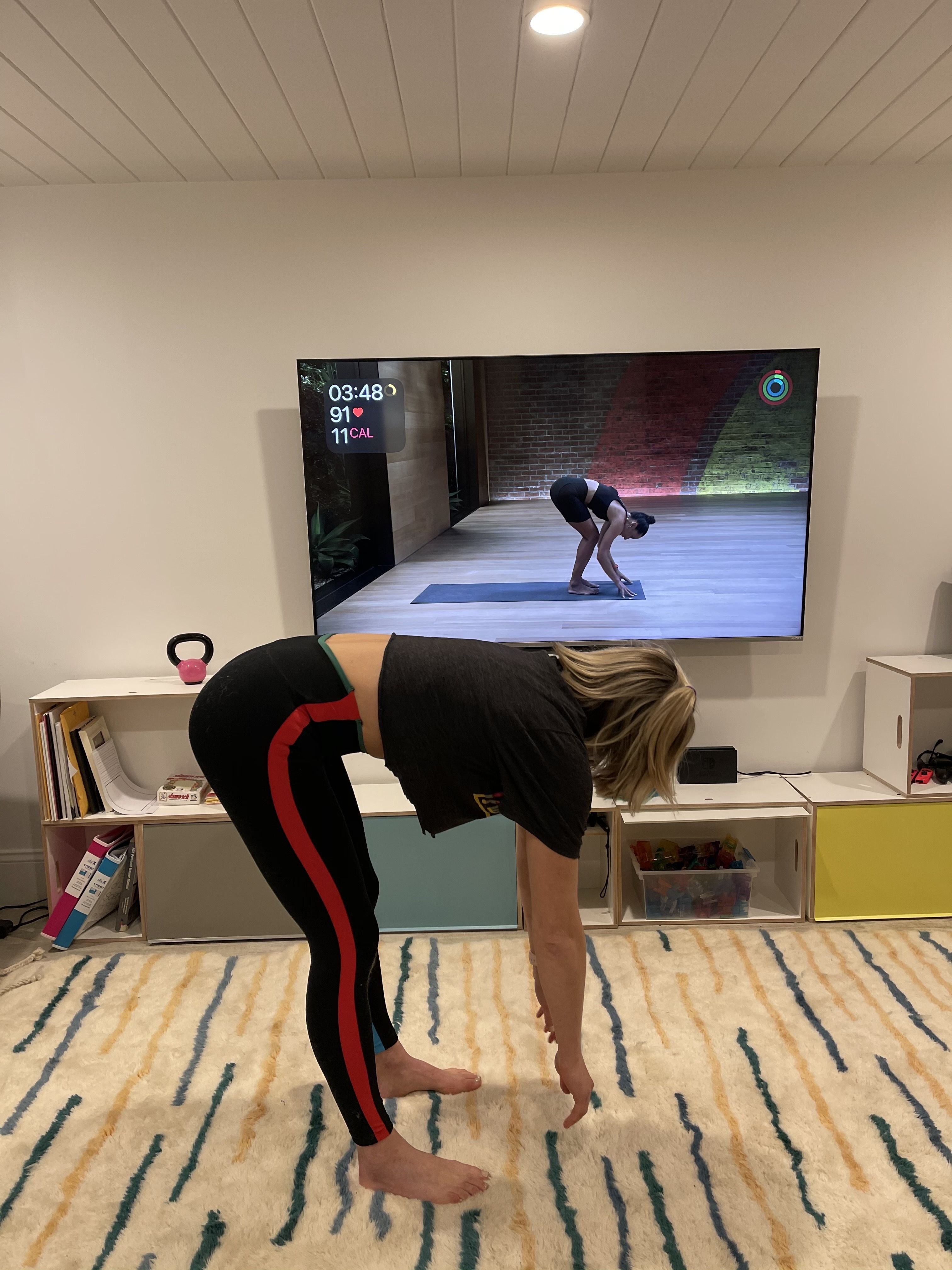 It’s easy to find what you want (or didn’t know you wanted!).

New to the Watch? After logging three activities—whether via AF+, in the Apple Watch Workout app, or on other third-party fitness apps that integrate with the Health app—Apple Fitness+’s recommendation engine suggests workouts that match what you typically do, making the library of options super efficient to navigate. (For existing Watch users who’ve cranked out three workouts already, these will automatically populate.) You’ll also score recs that complement and balance your regular routine (like yoga, if you’re doing a lot of running, for instance). 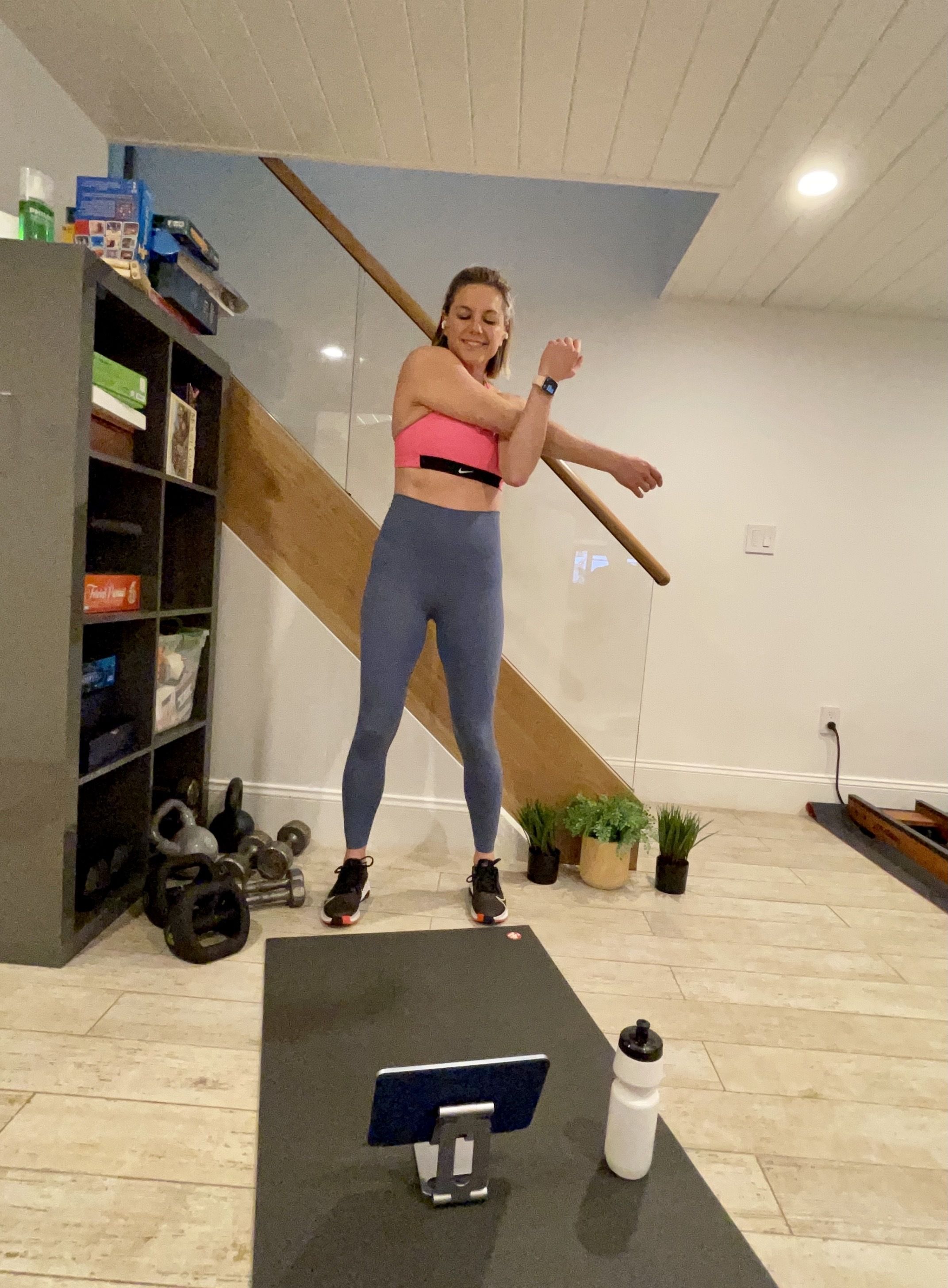 It’s fun to explore new modalities and try new trainers: 30 second preview trailers make it clear what you’re getting yourself into before you enter a workout. I tried rowing on a loaner erg machine, and clicked so well with the content (a testament to trainers Josh and Anja) that I’m considering adding the rower to my growing arsenal of home fitness tools. 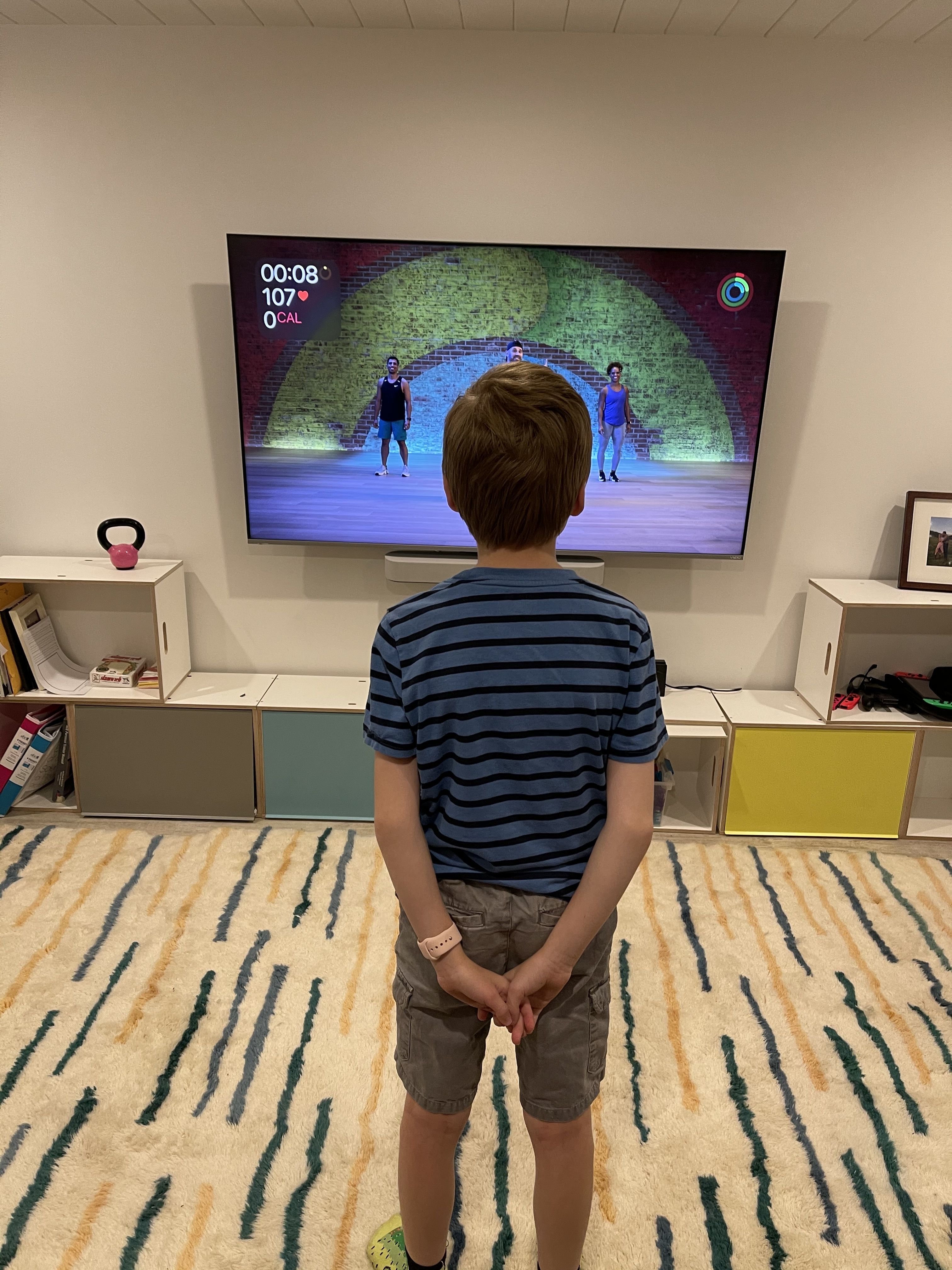 But one of the best things about AF+ is that you don’t have to invest thousands of dollars in equipment, and you can use it anywhere.

All you need to do is to strap on your Apple Watch, grab your iPhone or iPad or click on your Apple TV, and you’re all set. It’s a powerful option for sneaking in a workout whether I’m up at dawn looking to #OwnMyMorning while my three kiddos sleep, or am reveling in the respite of a YMCA visit. And when it’s safe to travel again, I’ll download from the AF+ library so my workout is sorted, no matter the WiFi situation.

Maybe most important of all, I love Apple’s commitment to promoting physical activity beyond the minutes you’re actively sweating.

It is awesome that many of us are setting (and achieving!) new physical goals during the lockdown, but I worry about how many fewer steps we’re collectively taking without our commutes, meetings, or even trips to the bathroom on the other side of the office. Layering AF+ into an existing ecosystem of Apple Watch’s tools that nudge you to stand, move, and breathe at a regular cadence helps each user complete theirholistic health picture.

Apple champions a WH truth. Workouts are crazy-powerful and good for your physical, emotional and mental health…but regular movement throughout the day is huge.

If a fraction of existing Apple Watch wearers add dedicated workouts to their lives now that AF+ has launched? And if the folks who invest in an Apple Watch for AF+ access end up moving more each day because of the micro but major nudges they receive? I predict the world will be a healthier, happier place.

The bottom line: Apple Fitness+ is an easy and effective way to get moving for beginner and advanced exercisers alike, and is a particularly good value for those who are already part of the Apple ecosystem. You can use it at home or in the gym, with or without equipment.